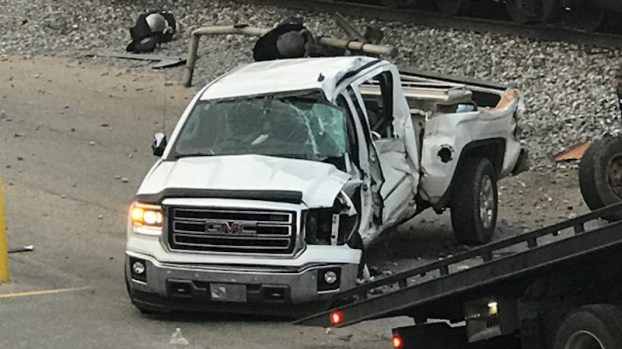 A train collided with a white GMC pickup truck at the crossing behind the Alabaster Police Department on the morning of Jan. 26. (Contributed)

Recent events involving train collisions have frequently made local and national headlines and tragically, lives have been lost in several cases.

A collision between a pickup truck and train happened as recently as Jan. 26 in Shelby County, when the Alabaster Police Department was forced to close the railroad crossings on Second Place Northwest near the U.S. 31-Alabama 119 intersection.

In Shelby County, railroad tracks, crossings and trains are plentiful in almost every city and with statistics still being calculated for 2017, Operation Lifesaver of Alabama Executive Director Nancy Hudson urges motorists to use caution to prevent becoming a statistic in 2018.

“Railroad safety is something we all need to be reminded of,” Hudson said. “It’s so easy to get complacent, especially if you cross railroad tracks a good bit and don’t see a train. The numbers for injuries and fatalities have steadily gone down over the years but even one death is one too many. Drivers are distracted now more than ever with cell phones, running late, texting and a lot of times people don’t see trains.”

Hudson said the latest statistics for the state of Alabama involving train collisions, injuries and deaths are alarming.

In 2016, Alabama ranked No. 8 nationally in both vehicle-train collisions and vehicle-train fatalities, according to preliminary 2016 Federal Railroad Administration statistics.

Seventy-eight train collisions resulted in 42 injuries and nine deaths in the state of Alabama alone.

Hudson said that when it comes to a train taking on a passenger vehicle, There’s no comparison.

“An average vehicle doing 55 miles per hour needs a little over 200 feet to stop,” Hudson said. A 100 car freight train doing 55 miles per hour will need at least one mile down the track for it to stop. The biggest thing is to always expect a train when crossing tracks and expect a train to be there. Always expect to stop if a train is coming. We’re supposed to treat the sign like it’s a yield sign.”

Part two of the problem doesn’t involve vehicles at all. Many fatalities with trains are caused by pedestrians trespassing on railroad property. Hudson said people can be tempted to walk along railroad tracks out of curiosity, but this should be avoided at all costs.

“Railroad property is private property and so many people don’t realize that,” Hudson said. “A lot of adults don’t realize that and people want to walk the track to see where it goes but doing that is trespassing. A lot of times, 50 feet on either side of the tracks is considered trespassing. Trains oftentimes have run over people trespassing instead of people in vehicles. At Operation Lifesaver we always say ‘stay off, stay away and stay alive.’”