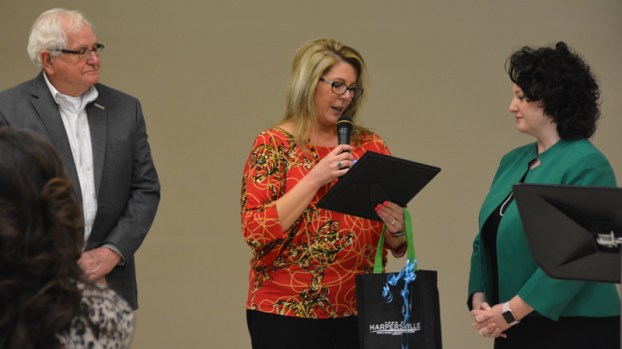 COLUMBIANA – April Stone was recognized for her efforts with the South Shelby County Chamber of Commerce during her final luncheon on Thursday, Feb. 1.

Stone has accepted the position of executive director with the Hoover Area Chamber of Commerce.

“This has been a fantastic five years, and I have enjoyed the journey with you all,” Stone said.

Jeremy Arthur, president and CEO of the Chamber of Commerce Association of Alabama, was the luncheon’s guest speaker.

Arthur, who led the Prattville Chamber of Commerce for about 10 years, called chambers of the commerce the “premier local business advocate in Alabama” but said the organizations are often misunderstood.

“People think we do things we just don’t do,” Arthur said.

All chambers are different, Arthur said.

Arthur showed images of well-known people, places and events—including Al Capone, the Cherry Blossom Festival, Hollywood, the Miss America Pageant, Woodstock and Napolean Bonaparte, among others—and talked about how chambers of commerce have been involved in much of the world’s history.