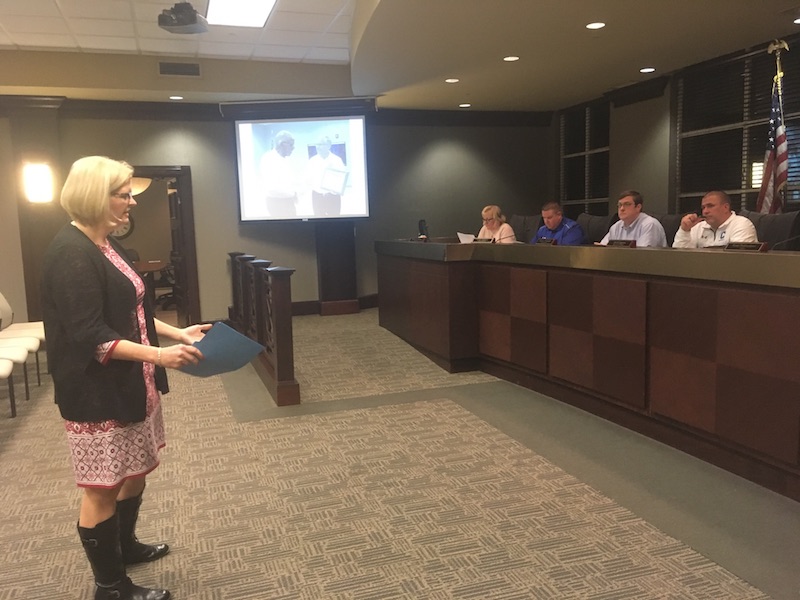 Chelsea resident Valerie Atchison speaks out against the re-zoning request of a property on Griffin Corporate Drive, claiming that the property is poorly maintained, at a public hearing during the city's Feb. 6 council meeting. (Reporter photo/Amalia Kortright)

CHELSEA – The city of Chelsea held a public hearing to discuss a re-zoning request from Shafig Samji of Evolution Holdings, LLC, regarding a 3.54-acre property located at 62 Griffin Corporate Drive at a regularly scheduled city council meeting on the evening of Tuesday, Feb. 6.

According to the request, which was recommended for approval by the Chelsea Planning Commission, Samji is seeking to re-zone his property from a B-1 commercial property to a B-2 commercial property.  The re-zoning would allow Samji to expand on the property, which currently houses the Chelsea Quick Mart gas station, to include a used car lot.

During the public hearing, two Chelsea citizens voiced their opposition to the request.

Resident Valerie Atchison said the property was poorly maintained, and cited concerns that debris from the lot were flowing through a nearby creek onto her property.

“If (Samji) is already not maintaining it properly, how can we expect him to maintain the new lot?” Atchison said.

Resident Tony King referred to the lot’s condition as “depleted,” and said a study ordered by Chelsea citizens and done by Guardian Systems, Inc. of Leeds revealed an “oily film” in water runoff from the property.

No representatives from Evolution Holdings, LLC spoke during the public hearing.

Ultimately, city council member Casey Morris made a motion to delay the council’s vote for further consideration, based on the objections from residents. The motion was unanimously agreed upon by the rest of the city council.