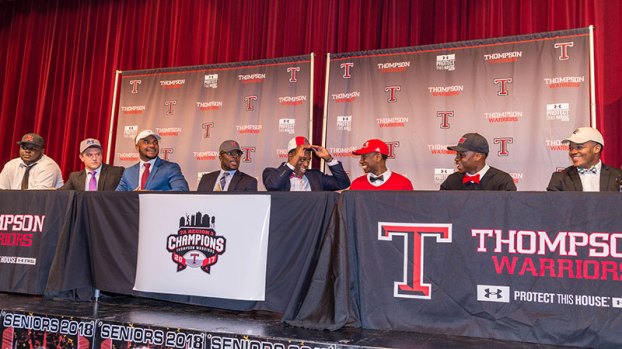 ALABASTER – College football programs throughout the southeast will have connections to Thompson High School next season, after the school celebrated one of its largest-ever football scholarship signings on Feb. 7.

“All around, what an awesome, awesome experience today to get to see eight of our finest young men get up on the stage today and to get to sign a paper stating their future,” said THS Principal Dr. Wesley Hester. “It’s something that symbolizes their hard work. That’s one of the most special things that, as a principal, I get to experience to see our young people get to map out the next four years of their life. Thank you for what you’ve done for Thompson football. It’s a great day to be a Warrior, and we are stronger Warriors today than we were yesterday thanks to these guys.”

“They are special kids from special families. We put a plan out there for these guys, and they bought into it,” said THS head football coach Mark Freeman, noting the seniors were freshmen when he arrived at THS. “More is going to be done after they’re gone because of what they’ve done and the way they’ve done it. Every one of them are good people from good families, and you don’t find that. They’re special people and they’re going to make special things happen regardless of where they go.

By ALEC ETHEREDGE | Sports Editor BIRMINGHAM – Thompson’s running programs flashed their impressive talent during the fall in the... read more