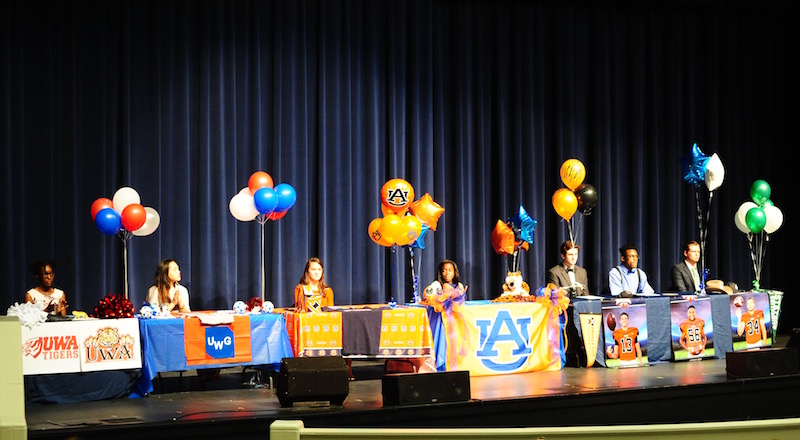 NORTH SHELBY – No matter where you looked on the stage inside the Performing Arts Center at Oak Mountain High School on Wednesday, Feb. 7, you saw someone special living out a dream.

Najuma Ali, Hailey Whitaker, Julia Pack, Anya Hunter, Jordan Davis, Carson Bobo and Connor Wilson all got to live out a dream as they sat in front of their peers, friends and family to sign scholarships to attend major universities on scholarships

Ali, Whitaker, Pack and Hunter all did so for girls soccer, while Davis, Bobo and Wilson will continue their athletic careers on the gridiron.

As far as the soccer players go, the four are coming off a runner-up finish in last season’s Class 7A Final Four and two state championships in 2015 and 2016.

It marks the end of an unbelievable era for Whitaker and Pack, but one that won’t come to an end as teammates as they will both be joining Auburn University’s soccer program next year.

In her five years with the varsity, Pack has scored 79 goals and assisted on an additional 61 goals for the Eagles.

“These accolades that she has won don’t reflect her work,” Oak Mountain head coach Chris Blight said. “She is pretty much oblivious to all of those things, but the work she puts in on and off the field is tremendous. Even though she puts in all of that work, she still continues to be a role model for our team. I just know she is going to be a tremendous player at the next level.”

Her current Oak Mountain teammate and future Auburn teammate has also been a leader for the Eagles in recent years. She’s been a two-year captain for the team and has scored 74 goals and posted 31 assists.

She has been honored with three consecutive All-Metro nods and is a three-year member of the Shelby County Reporter All-County team.

“Hailey is extremely athletic,” Blight said. “She has pace and speed and she is scary to watch at the high school level.”

Ali and Hunter were also key pieces to the success of this Oak Mountain team’s run to the Final Four last season and will be integral in helping this team achieve their ultimate goal of a state championship in 2018.

“It’s been a pleasure to coach these four outstanding girls and I know there is a big year ahead for us,” Blight said. “These girls and the rest of the seniors deserve the biggest sendoff possible.”

Blight went on to thank the stellar athletes for all of their dedication in their days wearing blue and red and wished them all the best of luck moving forward at the collegiate level.

When it comes to football, all three of those athletes had tremendous seasons. It was a season for the Eagles that started fast with a 3-0 record then hit a lull, before a switch flipped in the second half of the Mountain Brook game on Oct. 20.

The Eagles narrowly lost that game, but went on to win there last two games in a row thanks in large part to these three seniors.

The talented football player also was talented in the classroom and will now further not only his football career, but his academic career at Princeton University.

An Ivy League school, Princeton is a university with an acceptance rate of just 6.5 percent, showing the faith they have in Bob as an outstanding student-athlete.

“I’m going to keep it short because if I don’t then I’ll get emotional,” Oak Mountain head football coach Cris Bell said. “I’ve coached for a long time, next year will be year 30, I know I’ve never coached a tight end better than this guy right here and I coached a guy that played for both the Eagles and the Seahawks in the NFL.”

While his on the field play was second to none, it was off the field that pleased Bell the most.

“As good as he is on the field, he’s even better in person,” Bell said. “The fact that the No. 1 university in the country desires him says an awful lot about who he is.”

Bell also had a lot to say about both Wilson and Davis, who left their mark on the program as well.

Wilson, who played running back and on special teams for Oak Mountain, will be headed to Stetson University where he will major in marine biology.

Davis is headed to Faulkner University to continue his athletic and educational career. Like Wilson, Davis played multiple positions moving all over the defensive line.

“I’m so proud of all these young men, they’re just selfless, selfless individuals and I know all of these young ladies signing for soccer are as well,” Bell said.

Bell also added that the Oak Mountain football team had its share of ups and downs over the last few years, but that those three guys stuck it out and wanted to be part of the change, which shows their character.

All seven of the athletes that signed have an incredible talent and a desire to work hard for all of their goals. It’s a day where all of that hard work paid off as dreams came true.