Show the hometown love on Feb. 10

In case you missed the signs all over town or failed to see the Facebook posts, Saturday, Feb. 10, is “Love Montevallo Day.” 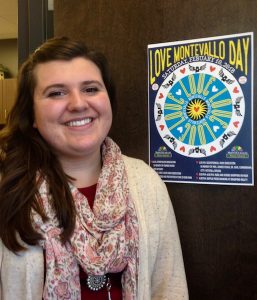 “We were in a meeting talking about all that’s going on—the streetscape project, the Owl’s Cove Park and the Bicentennial Park, and we realized they were all going to be ready about the same time,” Howard said,

“And it just turned into ‘Love Montevallo Day.’”

Bicentennial Park is the little spot on Main Street in front of Main Street Tavern. Expect those metal benches to be too hot for summer comfort, but they should provide an ideal people-watching perch in spring and fall.

Down a couple of blocks is Owl’s Cove Park, in front of University of Montevallo on Main (UMOM). It doesn’t happen often in this pavement-mad world, but asphalt was removed to make way for this downtown green space.

Love Montevallo Day starts at 11 a.m. with the Streetscape dedication in memory of the late former mayor, Ben McCrory. That happens in front of UMOM, the day’s center of activity.

Next, at 11:30 a.m. is Owl’s Cove Park’s dedication, where food, children’s activities and music begin at noon.

The Bicentennial Park in front of the tavern gets inaugurated at 1 p.m. in memory of Junie Craig, Dr. Earl Cunningham and Mitchell Spears.

Incidentally, a special feature of Bicentennial Park is what Howard described as “a big town-square type clock.”

“Love Montevallo Day started from a little idea and just grew,” Howard said. “After all the dedications there is Mugs & Kisses,’ which is a downtown shopping event.”

Howard’s job at City Hall attests to how much she loves Montevallo.

The daughter of Joe and Mary Howard grew up in Montevallo and went off to the Alabama School of Math and Science in Mobile and then on to the University of Alabama. With her 2015 degree in public relations and creative writing, she worked a year at Disney World. A year in Australia followed, but now she is back home because—“I love Montevallo.”

As does Trustmark banker Brandon Lovelady: “Multiple times a day, I see someone I know walk into the bank and have to go give them a hug.”

Harriett Panchoo, owner of Happy Dollar, loves her ringside seat to all that happens on Main Street. “I love the peacefulness and I love the people.”

Panchoo said that she gets a kick out of watching Montevallo motorists try to parallel park. Downtown was all angle parking until the redesign of Main Street.

Matthew Allen at Frio’s graduated last year from Montevallo High School. Now a UM student, he passed on a chance to college in Florida. “This city is a big part of the reason I stayed here.”

By NANCY WILSTACH / Community Columnist “The little church with the big heart” — that’s the slogan outside St. Andrew’s... read more