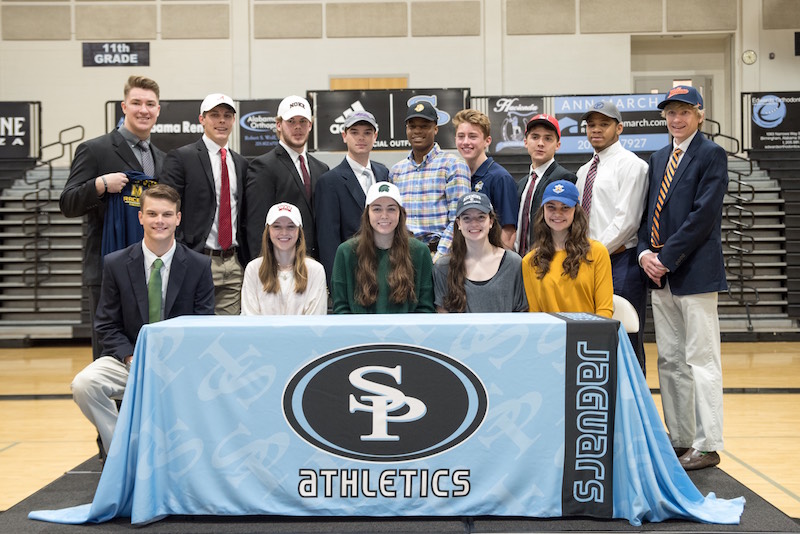 Spain Park had a total of 15 athletes sign to play sports at the collegiate level on Wednesday, Feb. 7. (Reporter photo/Keith McCoy)

HOOVER – At 8:15 a.m. on the morning of Wednesday, Feb. 7, 15 senior athletes from Spain Park High School sat to the left of a stage, while athletic director Patrick Kellogg spoke.

After Kellogg spoke highly of each of the athletes and their accomplishments in the Jaguar athletics program, each player was called up one-by-one to sign their letter of intent to join a collegiate program for their respective sport.

In front of teachers, fellow athletes, family and friends, those 15 players who have worked tirelessly for the last 17-18 years to play sports beyond the high school level, finally got to see a dream come.

It’s a day that wouldn’t have been possible without all of the sacrifices made by the parents of each of the young athletes and that was Kellogg’s first statement.

“Parents, you’re looking at your kids on the stage here and without you they wouldn’t be where they are today,” he said. “You’ve put in a lot of time, energy and hours, from washing uniforms, getting them food and taking them all over the place to compete. You deserve a huge thank you for all you have done for these kids.”

After thanking the coaches and athletes for their hard work and dedication to be prepared for this special day, Kellogg proceeded to call each athlete up to sign and pose for a picture with their family.

Braxton Barker, Blake Hester, D’Arie Johnson, Jalen McMillan and Cole Starr were the five football players lucky enough to receive the opportunity to play football at the next level.

Barker, the starting quarterback on the football team, will follow in his dad’s footsteps and head to the University of Alabama as a preferred walk on.

The next highest total of signees came in the sport of golf where the Jaguars have built a dynasty over the last 10 years. This season a total of four golfers signed to attend colleges ahead of their last high school season.

Other athletes to sign included Cole Dillard for track and field, Marlee Johnson for volleyball, Brooks Rice for soccer and Josh Corley for lacrosse.

Before ending the ceremony, Kellogg reminded the athletes not to forget about the place that made this opportunity possible, Spain Park High School.

“Remember where you came from and never forget your roots,” Kellogg said. “Make sure to come back and visit your teachers and coaches because we want to hear about how successful you are. You are always welcome back here at Spain Park High School.”