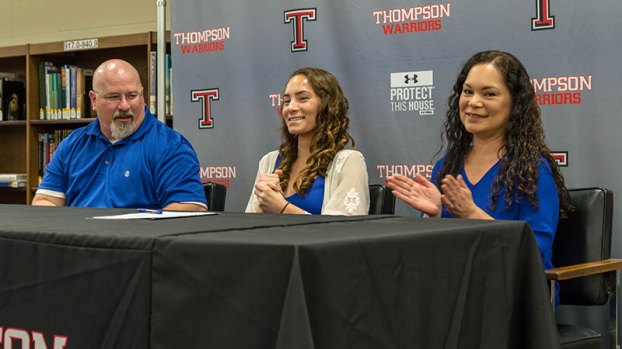 Thompson High School soccer player Melanie Brannon, center, signs a scholarship with the University of Alabama at Huntsville during a Feb. 7 ceremony in the THS library. (Reporter Photo/Neal Wagner)

ALABASTER – Thompson High School soccer player Melanie Brannon has had a good week. A day after being named the team captain for the 2018 season, Brannon was surrounded by loved ones in the THS library as she solidified her plans for after high school.

Brannon, a standout in the successful THS soccer program, will continue her academic and athletic career at the University of Alabama at Huntsville next year after signing a scholarship with UAH on National Signing Day on Feb. 7.

“We’re here today because she is an outstanding athlete and a great soccer player. She is a dominant competitive player, and everyone loves watching her play,” said THS head soccer coach Nathan Button. “Mel is academically outstanding as well. She takes one of the toughest course loads we offer here, and she has dedicated herself to being successful on and off the field.

“Her success has cumulated into her continuing her athletic and academic career at UAH,” Button added. “While Mel’s signing marks an end for us and a beginning of her transition into her new life, there are many things we will miss about her. As Mel looks to the future, we are all excited to see her play the game she loves.”

Over the past two seasons, Brannon has scored 16 goals, recorded 11 assists and helped her team win the Island Cup. She also is a valedictorian for the class of 2018.

“I want to thank my family. My parents have always been my number-one fans,” Brannon said. “I also want to thank my older sister. You’re the strongest woman I know. I’m also thankful for my teammates. I love soccer because of them.”