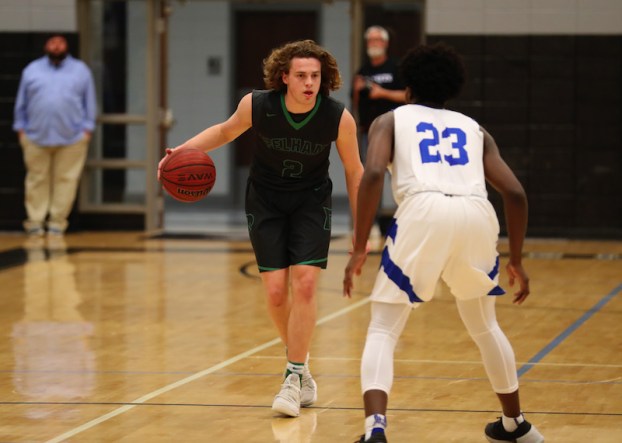 Justin Allison had 23 points in the second half, including 10 consecutive free throws to ice a 56-50 win over Chelsea on Wednesday, Feb. 7. (For the Reporter/Cari Dean)

HELENA – After losing twice in the last three weeks to the Chelsea Hornets, the Pelham Panthers’ 2017-18 basketball season came down to one final matchup with the regular season second place team.

In the two previous matchups, Chelsea was able to top Pelham 60-43 in the first matchup and 60-58 in the second as the gap shrunk to just two points.

Against all odds, the Panthers overcame several obstacles to pull off the upset and keep their season alive thanks to 23 second half points from senior guard Justin Allison that sparked a 56-50 win.

“That was just a great high school basketball game,” Pelham head coach Joel Floyd said with a massive grin on his face. “I told them before the game that they were going to face adversity and they came out and played through it tonight.”

And adversity they faced thanks to two early fouls from Justin Allison, which forced him to the bench with two minutes left in the opening quarter.

He was forced to the bench after scoring just four points in the period and sat there for the entire second quarter as well, but fellow senior Mason Goolsby was waiting in the wings.

Goolsby had four points in the opening eight minutes, but Chelsea took advantage of Allison sitting on the bench and took a 15-12 lead at the end of the first quarter.

The Hornets were able to hit three straight 3-pointers to start the game, which was a big reason for the hot start on the offensive end of the floor.

Goolsby, however, started the second quarter with a 3-pointer to tie the game and shortly after hit another jumper to put the Panthers in front for the second time in the game at 19-18.

He ended up with nine first-half points and along with Edward Gipson’s six points, Pelham was able to take a 23-20 lead into the half despite Allison, who averages 25 points per game, sitting on the bench for 10 of the 16 minutes in the first half.

“Mason Goolsby was outstanding tonight,” Floyd said immediately after shaking the senior’s hand. “I can’t say enough how proud I am of the performance he put in to give us such a boost in this game.” Students hold up a Mason Goolsby big head after he makes a 3-pointer. (For the Reporter/Cari Dean)

His play along with Gipson’s gave the Panthers a strong confidence coming out of the break knowing Allison was coming back in.

“We had so much confidence from the way other role players were able to play in the first half that it boosted us coming out in the second half despite a slow start,” Floyd said.

It was a less than perfect start from the Panthers, however, as Chelsea came out firing on all cylinders to start the third.

“Chelsea was right there in it because we couldn’t get any stops defensively early in the second half,” Floyd said.

That’s when Allison decided that he didn’t want this to be his last basketball game in green and gold. After Chris Brown hit an and-1 to draw Pelham within four points, Allison went on a 7-0 run by himself to end the quarter and cap off a 10-2 run by the Panthers.

Allison’s last shot of the quarter came on an inbound play where he caught the ball, took one dribble to his right and pulled up to shoot a 3-pointer over Chelsea’s Tyler Coleman at the buzzer to give Pelham a 42-41 lead.

All Coleman could do was walk off shaking his head and laughing, because he knew he couldn’t have played any better defense.

It was just the beginning for Allison, who completely took over the game in the fourth quarter.

Ina tightly contested game, he didn’t shy away from the spotlight knowing that if the team was going down in his last game it was going to be on his shoulders.

He scored all 14 points in the final quarter for Pelham, including 10 consecutive free throws after the game was tied at 46-46 with 3:30 left to seal the win.

Allison ended the night with 27 total points to lead all scorers.

“Justin was Justin and we knew what we were going to get,” Floyd said. “He was begging me to go back in with the fouls, but I just told him ‘We are winning right now so there’s no reason to risk it.’ That paid off because it gave the rest of the guys confidence for the rest of the game, then he came out and was unbelievable in the second half.”

Goolsby and Gipson each stepped up in a big spot and added 11 points apiece in the winning effort.

Pelham has now clinched a spot in the Sub-Regional round of the playoffs and will take on Helena in the area tournament championship.