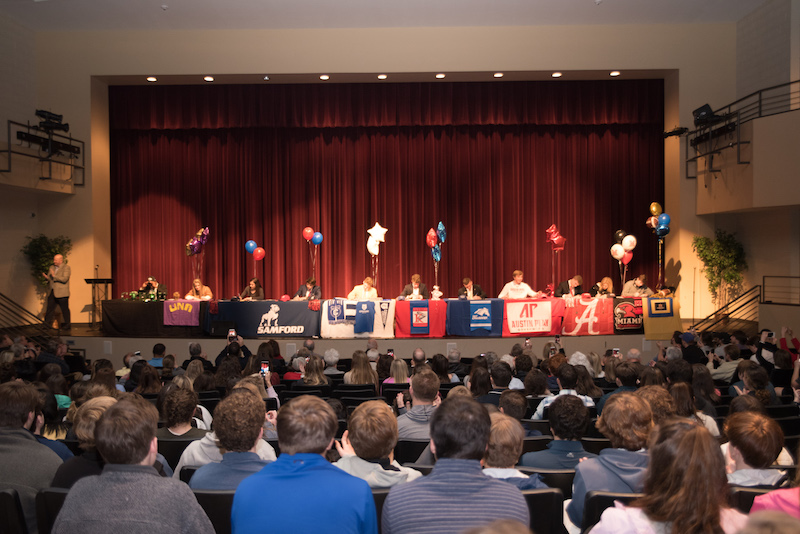 NORTH SHELBY – Different colored balloons, different banners and different athletes all graced the stage inside Briarwood Christian School’s auditorium on Wednesday, Feb. 7, but despite all of that difference there was one thing that was the same among the 11 athletes signing to continue their academic and athletic careers at the collegiate level—a smile.

Each of the 11 athletes, representing baseball, cross country, football, soccer, softball and track and field, saw the hard work and dedication of so many years finally pay off.

The 11 athletes signing were four more than last year’s seven signees and according to athletic director Jay Matthews it was the largest signing class the school had ever seen, which sheds light on the success of the school, coaches and athletes.

“All of these athletes were successful before this day and have achieved great things before this day,” Matthews said. “Only one percent of seniors have opportunities like this, so I look at this as an opportunity for all of them to go to a school, get an education and compete athletically. This is a day to celebrate that opportunity and everything they have accomplished and will accomplish.”

Once Matthews finished up his opening remarks, each student-athlete became the focus of the day starting with baseball and going alphabetically by sport.

Carson Eddy, while he shined on the football field for the state runner-ups, was the lone baseball player to sign a scholarship. The senior will be attending Samford University next fall once his last season with the Lions is complete.

“I met him in the fifth grade and the thing I learned about him early on was how to spell his name and put him in the lineup,” head baseball coach Steve Renfroe said. “He’s a great hitter and baseball player, but such a hard working guy. He’s hit as much as one other guy that I’ve ever coached and that’s Frank Thomas (Baseball Hall of Fame).”

One of the best cross country runners in the state the last several years has been Zach Howard, who has continually set records for the Lions. His hard work has paid off as Howard will now be heading to the University of Alabama at Huntsville to run cross country.

“The thing about Zach is that he absolutely loves running, it’s a passion that he has that is unusual,” head coach Aaron Margene said. “His career has been outstanding, but more importantly he has had an impact on our team that will live on.”

Fred Yancey has been coaching high school football for almost 30 years and has probably not struggled with losing a senior class like this one possibly ever.

His team finished 14-1 and as state runner-ups after a heartbreaking loss to St. Paul’s in the state championship game, but it produced a group of three seniors that now have a chance to better themselves at the next level.

Offensive lineman Garrett Bell is headed to Austin Peay after anchoring the Lions’ line this past season.

“It was a blessing to get to coach some great players this year,” Yancey said. “One of those guys was Bell, who could have been an average football player except for all of the hard work, effort and dedication that he gave to the sport.”

Quarterback Michael Hiers picked up a late offer and is headed to Murray State after a season that featured 2,569 passing yards and one of the best seasons in the school’s history.

“He was 5-foot-9, 130 pounds just two years ago as a sophomore,” Yancey said causing a chuckle in the audience. “Since then not only has he physically grown, but he’s always been a tough guy, a tough competitor and a great teammate. This year he had one of the best seasons at quarterback I have seen.”

The final of the three to sign was defensive back Carson Donnelly, who is headed to Clemson as an invited walk-on. Since Donnelly will be a walk-on, he didn’t officially sign a scholarship, but did get a visit from Clemson head coach Dabo Swinney two weeks ago to receive the offer.

Between boys and girls soccer, the Lions had four players sign to attend colleges. They were athletes that were all part of a Final Four run last season as the girls brought home the state championship and the boys fell in the title game.

Alex Broughton was the lone girl to sign as she inked with the University of North Alabama for women’s soccer.

“I’ve known her since she was a little kid kicking the ball around,” head coach Ryan Leib said. “She has really developed into a great player and person so it’s a privilege to finally see this day come.”

Griffin Felton signed with King College, J. McClung signed with Central Methodist and Bryant Wood signed with Covenant as all three of those athletes will continue playing men’s soccer at the next level.

“I just want to say congrats to all of these special athletes on this stage today,” head coach Shawn Brower said. “But I especially want to congratulated these three young men who have accomplished so much with our soccer program.”

Riley Coyne was the lone softball player to sign, but an incredible career made her signing with the University of Miami Ohio a special one.

“One thing I’ve realized with Riley is that she wants to be better,” head coach Doug Lamon said. “She has a work ethic second to none and continues to press harder and harder to become a better athlete, student and person.”

Two track and field athletes are also headed to prominent schools to continue at the collegiate level.

Domingue has won the javelin event at the state championship the last two years and continues breaking records for the Lions.

“I have appreciated him very much because he is not only a wonderful athlete and student of the game, but he has really studied the sport and basically become my assistant coach,” track and field head coach Glenn McWaters said.

Hutchinson, who also stars on the basketball team, was a part of two state championships last year in the 4X200 and 4X400 relays with the Lions.

“Once the coach at Samford found out she was interested and how good she was, he was excited to have her,” McWaters said. “She will be a tremendous asset to that program next year.”

For all 11 athletes that signed, it was a day of celebration with their families, friends and coaches for all of the trial and tribulation they have been through over the course of their athletic careers.