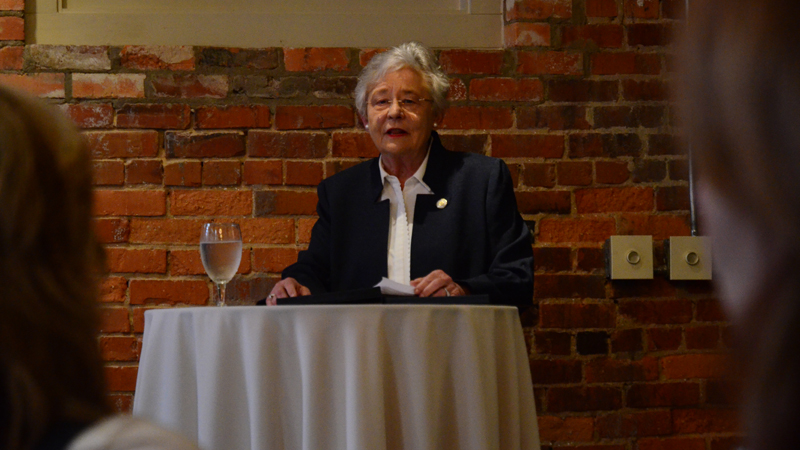 During the event, which is a collaborative program of the Greater Shelby County, South Shelby and Montevallo chambers of commerce, participants traveled to Montgomery and heard from various state leaders, including Gov. Kay Ivey at a luncheon.

Ivey touted her work to stabilize the state during a tumultuous period that included her appointment to Alabama’s top position but said many challenges remain.

“Now that we’ve steadied the ship, the challenge is to move toward progress and sustainability,” Ivey said. “We’ve turned the page on the past, and now I’m committed to moving forward.”

During her tenure, Alabama’s unemployment rate has dropped to 3.5 percent and $5 billion in new investments have been announced, she said.

“The people of Alabama are working and better able to provide for their families and children,” Ivey said.

Greater Shelby County Chamber of Commerce Board of Directors Chairman Joe Meads of Sain Associates thanked Ivey for expediting a project to widen Interstate 65 in the county.

“I heard you loud and clear,” Ivey said about the desire for the project, and noted that it is a good example of local and state governments working together.

With Reps. Corley Ellis (R-Columbiana), Matt Fridy (R-Montevallo) and Arnold Mooney (R-Birmingham) in attendance at the luncheon, Ivey thanked the local delegation for their “strong leadership.”

“Without strong local leadership, there’s little we can do at the state level,” she said.

Alabama’s most pressing problem is prison system reform, the governor said, as the state faces a court order to improve staffing, inmate health care and infrastructure.

“This is an Alabama problem, it has been for a long time, and it needs to have an Alabama solution,” Ivey said about avoiding a potential federal takeover of the system. “Now is the time to act, and I’m encouraging all our legislators to step up to the plate.”

Columbiana Mayor Stancil Handley and Chelsea Mayor Tony Picklesimer thanked Ivey for the dignity she has brought to the governor’s office, and Mooney said the governor’s open-door policy about meeting with legislators has been welcome.

After the luncheon at Central Restaurant, Drive-In participants traveled to the Business Center of Alabama to hear from various state officials.

Alabama Department of Economic and Community Affairs Deputy Director Anita Archie said the department is involved in an initiative to make broadband internet widely available through incentives to providers.

“Broadband is an infrastructure,” Archie said. “It’s so important to the viability of your community.”

Jimmy Baker, chancellor of the Alabama Community College System, said the state’s needs include focusing on skills students will need in their careers, standardization of distance education programs, a common accounting system among the state’s 24 community colleges and establishing a technology center.

“We’re trying to catch up and get ahead of the curve and be a leader instead of being behind,” Baker said.

Lynn Beshear, commissioner of the Alabama Department of Mental Health, said mental health issues are widespread, and the state lacks systems to deal with them.

“The amount of work that needs to be done is impossible,” said Beshear, who has identified areas of focus as prevention, crisis care, housing and workforce integration.

Chris Blankenship, commissioner of the Alabama Department of Conservation and Natural Resources, pointed to Oak Mountain State Park as a beneficial partnership between state and county governments.

Blankenship said officials have worked to establish online reservation systems for parks and study the feasibility of installing chair lifts for bikers at OMSP, among other efforts.

Ted Clem, director of business development for the Alabama Department of Commerce, said 2017 was a remarkable year for the state with $900 million in economic investments and 3,900 jobs created in the automobile sector alone.

Clem said the state must continue to push for new businesses.

“Economic development is not an event in time, it’s a commitment to a long-term, sustained effort,” he said.