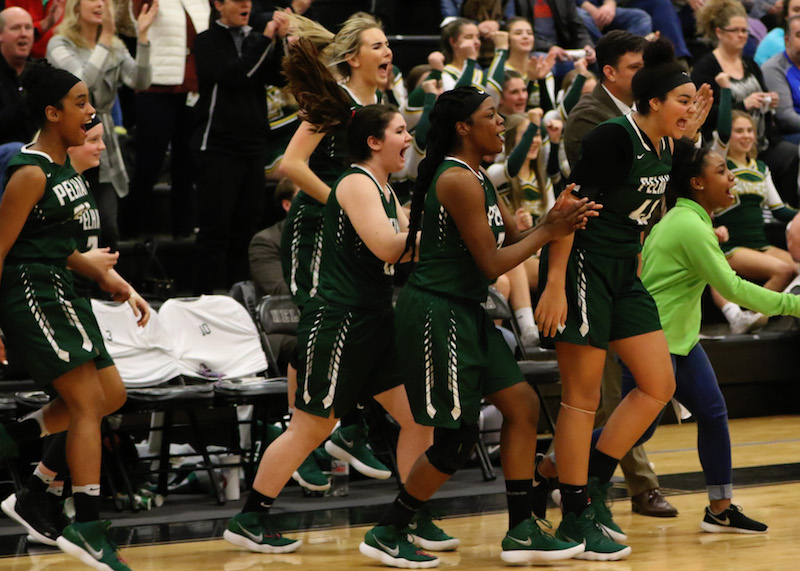 Pelham's girls basketball team is headed to the Sub-Regional round of the playoffs after pulling off a comeback win against the Chelsea Hornets in the first round of the area tournament. (For the Reporter/Cari Dean)

HELENA – The Chelsea and Pelham girls wowed fans in two regular-season games on the hardwood as they battled to two-point contests twice in the regular season, one of which went to overtime.

In both of those games, Chelsea came out victorious, sweeping the regular-season series by scores of 44-42 and 60-58.

On Wednesday, Feb. 7, in a win-or-go-home game, the two thrilled the fans again, battling to a second overtime game, but for Pelham the third time was the charm as they outscored Chelsea 12-0 in overtime to pull off a 51-39 win.

While the middle of the game turned to Chelsea’s favor, the start was very balanced and tightly contested.

The two teams went shot for shot as the Hornets hit five jumpers and the Panthers hit four jumpers and three free throws to create an 11-11 tie at the end of the opening frame.

Chelsea was able to open things up in the second quarter, however, as the Hornets put together their strongest offensive quarter of the game and also picked up the pressure defensively.

Thanks to 10 combined points from Jordan Parker and Hope Richard, Chelsea went on a 14-3 run at one point in the quarter before Hannah Pritchett hit a late 3-pointer for Pelham to cut the deficit to 27-17 at the half.

Not much changed in the early going of the second half as the Panthers went scoreless for the first 3:30 of the quarter, while Chelsea started the period on a 5-0 run to take a dominating 32-17 lead midway through the frame.

Chelsea’s full-court press was causing Pelham all sorts of trouble even getting the ball across half court.

Somehow, the Panthers were able to rebound from the misery of the last two quarters of action and ended the final 3:22 of the quarter with 5-0 run of their own to cut the deficit back to 10 at 32-22 heading to the final quarter.

The flip that had switched for Pelham didn’t go off the rest of the night as they eventually extended that run to 9-0 and then 16-4 after Emma McKinney hit an and-1 to cut the Chelsea lead to 36-33 with just over three minutes remaining in the game.

Pelham had already turned the momentum of the game into their favor and that’s when Richard went down with a bad ankle injury for Chelsea. The senior had 10 points in the game to that point and was the team’s back bone for much of the season after Michaella Edwards went down with an injury.

The Panthers were able to take advantage and eventually took a 39-38 lead after Jamila Wilson hit two free throws with less than a minute to play.

Ellen Fleming, however, got to the line on Chelsea’s next possession and mad one of two at the line to tie the game with 36 seconds left, which eventually led to overtime.

In overtime, it was all Pelham as Wilson hit all five of her free throws and Kayln Tomlinson hit three of her four free throws to ice the 51-39 win and cap off a second half that saw the Panthers outscore Chelsea 34-12.

McKinney led Pelham with 16 points, while Wilson added 15 for the Panthers, who have now advanced into the postseason.