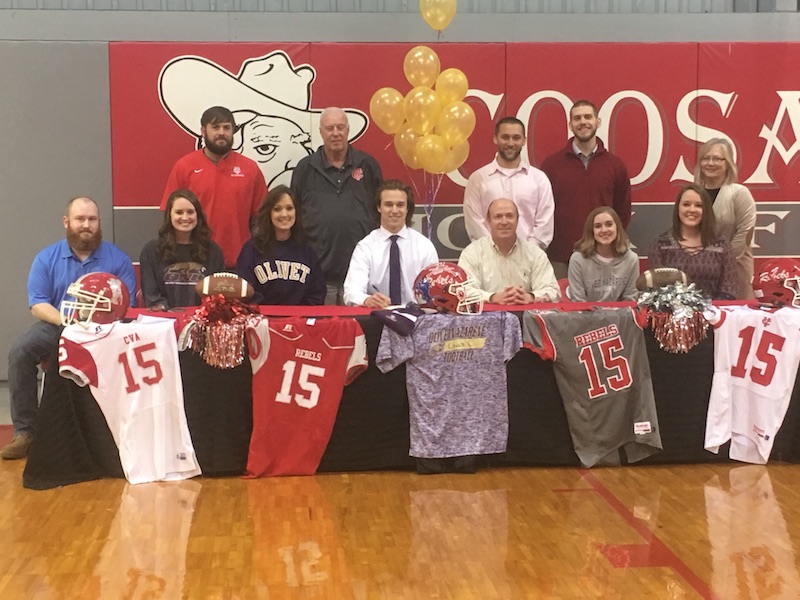 HARPERSVILLE- Coosa Valley Academy senior Chase Carlee signed with the Olivet Nazarene University football team during a ceremony on Wednesday, Feb. 7. Carlee has been playing football at CVA since the eighth grade, and played on youth league teams since the age of six.

“I love football the most,” Carlee said. “It’s the sport that I’m best at.”

Carlee said he was attracted to Olivet Nazarene, which is located in Bourbonnais, Illinois, because of its athletic programs and overall atmosphere.

“I had a really good feel for the school, and the coaches seemed to care about who I was,” Carlee said.

During the ceremony, Carlee began his speech by thanking God.

“Without him, this wouldn’t be possible,” Carlee said. “The blessings he has shared with me have been amazing.”

He also thanked his parents, David and Becky, and his sisters and brothers-in-law for their support throughout his high school years.

“I couldn’t have asked for better parents. They support me in everything I do,” Carlee said. “If I wanted to throw the football around and they didn’t want to, they did it anyway.”

CVA Athletic Director Gerald Carter said the school is proud of Carlee and looks forward to seeing him succeed in his college football career.

“It’s always good to have a student sign with a university and further their education and their athletic career,” Carter said. “We’re very proud of Chase. He’s a good athlete and a good person. We support him all the way.”

Principal Pam Lovelady also referred to Carlee as an “exceptional academic student with extraordinary Christian values who has been a role model for (the) school.”