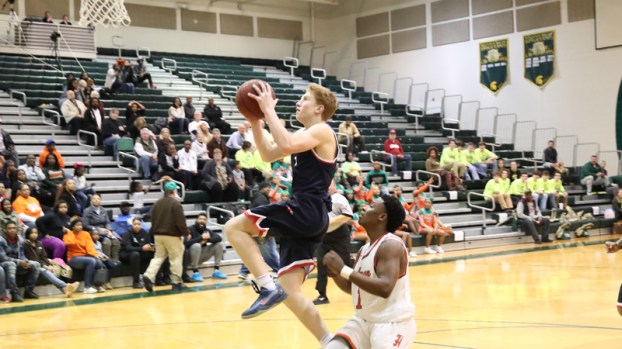 Drew Dunn scored eight points in the fourth period, but Oak Mountain could not overcome a deficit against Huffman in the Class 7A Area 6 tournament at Mountain Brook High School. (FOR THE REPORTER/DAWN HARRISON)

MOUNTAIN BROOK – Oak Mountain High School’s boys basketball team fell behind early and could never catch up during a 46-35 loss to Huffman on Thursday, Feb. 8, in the Class 7A Area 6 tournament at Mountain Brook High School.

Travarus Carroll scored 10 of Huffman’s 11 points in the first period as the Vikings staked out an early lead after one quarter, 11-7.

The scoring was more balanced for Huffman but even more lopsided for OMHS in the second period, as four different Vikings put the ball through the net for a 27-15 edge at halftime.

Oak Mountain attempted to mount a comeback in the third period, as four scorers recorded baskets and the Eagles allowed only one Huffman player to score—Michael Lockhart with five points—to pull within eight points of the lead at 32-24.

But Carroll and Eddie Smith connected on eight of 11 free throws in the fourth period to seal the win despite eight points from Drew Dunn in the quarter.

Carroll led all scorers with 18 points, while Chris Mayweather led OMHS with 11 points.

Huffman is scheduled to play tournament host Mountain Brook on Saturday, Feb. 10, in the area championship game. Regardless of the outcome, both teams will advance to the regional round of the state playoffs.