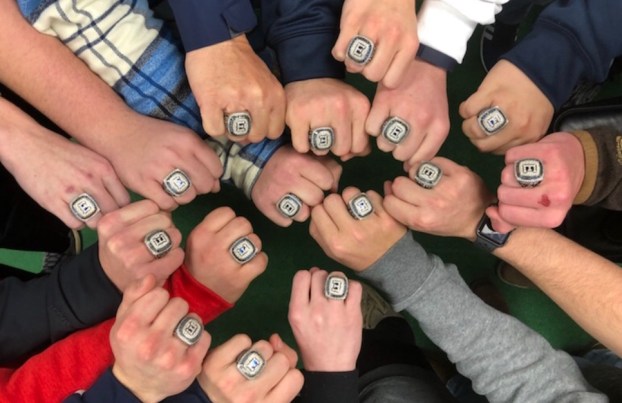 Some of the Evangel football players put their hands in to show off their ACSC championship rings. (Contributed)

ALABASTER – A special state championship season for the Evangel Lightning officially came to an end when the team that won the ACSC State Championship received its rings.

On Friday, Feb. 2, the Lightning gathered to collect their jewelry to cap off an unbelievable season that concluded with a 55-14 rout of Ezekiel in the title game on Friday, Nov. 3.

“They’ve been waiting on this day since the night we won the championship,” Evangel head coach Tim Smith said of his team’s excitement to get the rings. “When I got here, I told them when we win one we are going to get those rings. It’s something they’ve never done before so as soon as the game ended, they were already asking about them.”

While it’s a special accomplishment for the players involved, it also marked an incredible achievement for Smith, who now has a championship ring in every sport.

The veteran baseball, basketball and football coach had won championships in those first two sports, but picked up his first football championship this season.

Smith wanted none of the focus to be on himself and immediately deflected to talking about delivering on a promise to a special group of players.

“Winning the championship this year just proved to them that if you go out and work hard and do what you’re supposed to do, good things will come,” Smith said. “This is a good group of kids that showed up and worked hard every day. I take zero credit, because it’s all what God has laid out and the work they put in.”

While the football team continues to do big things after defending the ACSC title this season, the Evangel athletic program is growing extremely fast since Smith took over as athletic director.

Recently, 14 acres of land was donated to the school right next to the current football field. ECS is in the process of working on a new football field and expanding its athletic facility, including the possibility of a new basketball gymnasium in the coming years.

There has also been a new home dugout built for the baseball team, and other changes are in store to make athletics as great as they can be at Evangel.

“There’s so much excitement around here with everything that is going on,” Smith said. “It’s been busy and crazy; I don’t know how else to say it. It’s going to be a program where kids want to be now just to be a part of everything we are doing and building.”

It has led to sports teams at Evangel showing tremendous growth as well. The varsity baseball team has 21 players, the junior varsity team has 17 players as does the softball team, while the tennis team has 12.

“It shows that the program is growing and that people want to be a part of it,” Smith said. “The excitement is here. The part now is putting people in the right place to show these kids how to be leaders. We are raising up the next group of leaders and that means more to me than anything else.”

By ALEC ETHEREDGE | Sports Editor MONTEVALLO – A strong season for the Montevallo Lady Bulldogs got even stronger on... read more