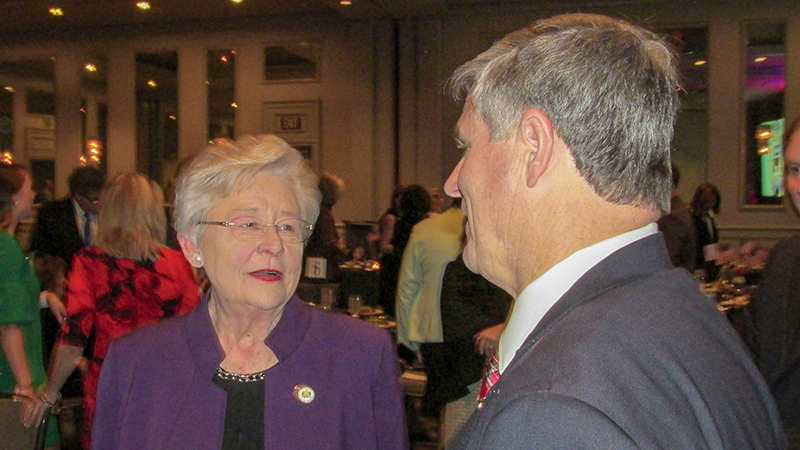 Ivey was keynote speaker at the Shelby County Republican Party’s Lincoln-Reagan Dinner on Feb. 8 at the Wynfrey Hotel in Hoover. She was introduced by Alabama House District 73 Rep. Matt Fridy.

Ivey noted that she’d been to Shelby County many times over the years, but this was her first time to be with Shelby Republicans since becoming governor on April 10.

“I became governor with three hours’ notice,” she said. “With the help of the good Lord and the good people of Alabama, we transitioned, and a dark cloud has lifted.”

Ivey said the 11 members of the Shelby County legislative delegation came to see her shortly after she took office and “explained I-65 to me!”

“We’ve begun a $60 million project to widen I-65 between Pelham and Alabaster, and to reconfigure the Highway 31 bridge in Calera, and I know this will help all of you when it’s completed in two years.”

Ivey said her administration has moved to bring needed reforms.

“We began a nepotism policy so that our employees nor their families would be eligible for state contracts,” she said.

Ivey said the governor’s office has worked for new investments in the state and encouraged current industry to expand. She touted the recent Toyota/Mazda investment of $1.6 billion and the 4,000 jobs it will bring to Huntsville.

“Our unemployment in December was at 3.5 percent,” she said. “Today we have 2.1 million Alabamians in the work force, and this is the highest number of workers in state history. And fewer Alabamians are eligible for Medicaid since they’re working. This year we’ll spend $48 million less for this program. And our institution of work requirements for Medicaid recipients has been copied by the Trump administration.”

“Studies show those who fall short in third grade are less likely to finish high school,” she said. “And failing to graduate from high school has economic and social implications. We want to fully implement this initiative by 2022.”

Ivey said she was proud of the education budget she’d presented to the current legislative session noting that it included pay increases for teachers.

Ivey said she also wanted to help the state’s veterans.

“My father was a World War II field artilleryman,” she said. “One out of ten Alabamians has worn a military uniform. I’ve proposed tax benefits for hiring veterans. I’ve also asked the legislature to grant free admission to state parks for all veterans. I hope they’ll do this.”

“The way we’ve run our prison system runs the risk of take-over by the federal government, and we don’t want that,” she said. “Our facilities are old and worn-out, and we need more funding to recruit and retain qualified corrections officers. And we must do a better job with inmate health care.”

Ivey praised the work of District 14 Sen. Cam Ward for his leadership in prison reform. She said she’d asked an additional $30 million in 2018 for prison staffing and healthcare, and $50 in 2019.

“It’s been challenging, fast and exhilarating these past months,” Ivey said. “We have an ambitious agenda. With the help of my staff, cabinet, the legislature and you, we’ll go forward to brighter days in the great state of Alabama.”