HOOVER – A Florida man arrested in Shelby County for human trafficking and drug possession has been arrested more than 15 times in at least seven states. 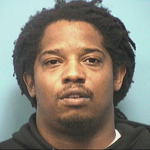 Korian Durell Thomas, 32, of Lynn Haven, Florida, faces charges in Shelby County of second-degree human trafficking and first-degree possession of marijuana after being arrested on Feb. 7 on Corporate Ridge Drive in Hoover.

The Shelby County District Attorney’s office recommended bond in the amount of $180,000 for the two charges.

According to the bond recommendation, Thomas has been previously convicted of felonies in Texas (robbery) and Louisiana (possession of marijuana with intent to distribute).

He has been arrested more than 15 times across at least seven states, according to the recommendation, and has previously been charged with human trafficking.

Thomas, who has previously listed addresses in Georgia and Missouri, has a pending warrant for failure to appear in Chilton County.

“Due to the defendant’s prior criminal history, he faces a sentencing range of 15 years to 99 years or life if convicted of the instant offense,” the recommendation reads. “The defendant is a flight risk due to the possible sentence he is facing due to his previous convictions and his lack of ties to the state of Alabama.”