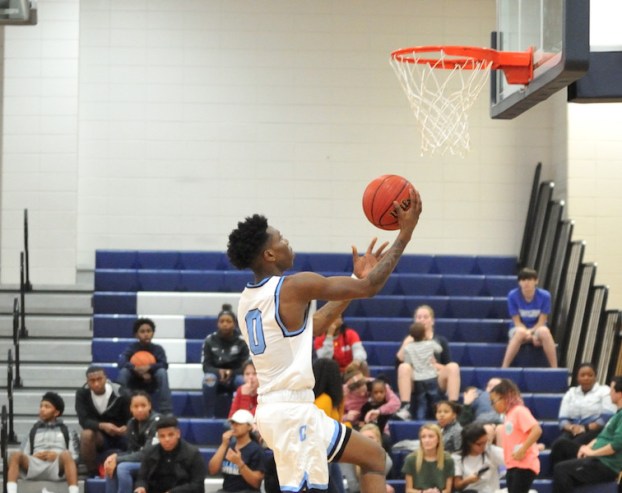 Calera scored at least 100 points for the second consecutive games as they took down Dallas County 102-61 to win the area championship. (For the Reporter/Larry Dancy)

CALERA – After scoring 100 points in a win over Jemison in the first round of the area tournament earlier in the week, you wouldn’t have thought the Calera Eagles could have done anything more spectacular, but on Friday, Feb. 9, the Eagles did just that.

With a 102-61 win over Dallas County in the championship game, the Eagles got the ultimate confident boost heading into the postseason having scored a combined 202 points in their last two games.

Calera (26-4) has now won 25 of its last 26 games and have done so by embracing a fast-paced, run and gun style helmed by its four starting seniors: C.J. Smith, Cornelius Brown IV, Kevin Dowdell and Jacob Smith.

Eagles head coach George Drake’s system is producing one of the most entertaining teams to watch in the state and are running at full steam heading into next week’s playoffs.

“I’ve got a group of guys that have been with me for a long time and we know that’s how we want to play at Calera,” Eagles’ head coach George Drake said. “We want to play aggressive and we want to really focus on the defensive end and put as much control pressure as we can on you in the full court. Our guys came out and really responded to that tonight and we were able to cause some turnovers.”

It was Jacob Smith who got the scoring going early for Calera on the inside and quickly reeled off eight points in the Eagles’ first big run. Dowdell had his best quarter steadily scoring throughout and laying it on thick at the end to finish with 10 in eight minutes.

Calera led 25-9 at the end of one, but that was only the Eagles’ third best quarter.

Brown joined the fun in earnest next and scored 12 of his game-high 24 just before halftime, including a couple baskets from long range. The Eagles’ lead ballooned to 26 after 9-2 and 10-2 runs before halftime.

All four seniors were in double digits scoring 48 of the team’s 54 first half points. And Calera still wasn’t even close to being finished.

Both teams had their best shooting quarter after halftime, but the Eagles still doubled the Hornets output. Brown had his second straight double digit quarter and C.J. Smith poured in seven for the third straight quarter to finish with 21.

When the dust settled the Eagles had 30 more points on the board for an insurmountable 84-46 lead. The fourth quarter was a foregone conclusion.

Dowdell, Brown and the Smiths all finished with at least 20 points and All-Tournament selections to their name. C.J. Smith took home the MVP honors.

“C.J. is the head of our snake I would say. He’s that guy that you can trust and put the ball in his hands, he’s going to be that floor general,” Drake said. “He’s an extension of me on the court and has been playing varsity ball since he was a freshman.”

Calera will play host to the Beauregard Hornets in the Sub-Regional round next Tuesday, Feb 13.