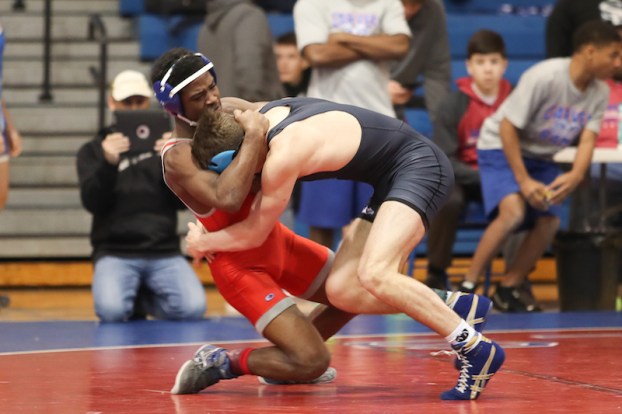 Helena and Chelsea will be sending their teams to the state championship meet in Huntsville after strong North Super Sectional performances, while Pelham will send five individuals. (For the Reporter/Dawn Harrison)

BIRMINGHAM – The Chelsea Hornets, Helena Huskies and Pelham Panthers all converged on the Birmingham CrossPlex’s Bill Harris Arena on Friday and Saturday, Feb. 9-10, for the Class 6A North Super Sectional.

Each of the three local teams was looking to punch their ticket to the AHSAA Wrestling State Championship Feb. 15-17 at Huntsville’s Von Braun Center.

With the top eight teams advancing to state from the North and South Super Sectionals, two of the three teams were able to claim a spot as Chelsea finished in second and Helena finished fifth.

The Hornets gathered a total of 181.5 points, which was solely behind Gardendale’s 207 points. The Huskies weren’t too far behind Chelsea as they totaled 160 points to finish in fifth.

While Pelham finished in 14th as a team, the Panthers did have five wrestlers finish in the top eight of their respective weight class, which was good enough to qualify individually for a spot at the state championship.

While Chelsea didn’t have any champions at the North Super Sectional, the Hornets did have six top five finishers at the event for strong consistency.

Helena was led by the same four wrestlers that have led the team all season.

Outside of those strong top three finishes, there were several other highlights for the Huskies as well.

Both the Hornets and Huskies will now send their full teams to the AHSAA State Wrestling Championship in Huntsville, while Pelham will send five wrestlers looking to claim individual titles.

By GRAHAM BROOKS / Staff Writer HELENA–Helena High School had a big day the morning of Wednesday, Feb. 7, as... read more