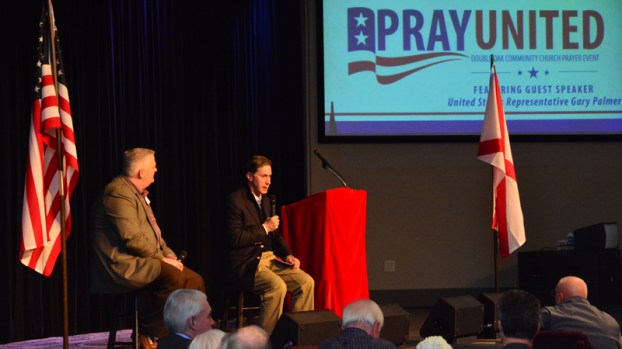 About 150 people attended the event including elected officials from the city, county and state level.

“We don’t want anything from you this morning,” Executive Church Pastor Frank Patrick said. “Our goal is to encourage you. We’re all coming together to pray for you.”

Attendees of the event that was open to the public were treated to breakfast.

Shelby County Schools Assistant Superintendent Lewis Brooks offered an opening prayer after reading from Mark 10:43-44: “…whoever wants to become great among you must be your servant, and whoever wants to be first must be slave of all.”

Cuevas said Pray United was intended as a way for the church to take initiative in addressing problems in the community.

“We often look to the government to solve all our problems, when so much can be done right here,” said Cuevas, who then talked with Palmer in an interview format.

The first topic was the shooting on June 14, 2017, of House Majority Whip Steve Scalise of Louisiana and others during a practice for the annual Congressional Baseball Game for Charity.

“I was 20 steps from the shooter,” Palmer said. “I immediately knew what it was. It was a miracle no one was killed with that first shot. Among the things I thought was, ‘Lord, if this is my day, I’m ready.’”

Palmer also talked about telling his wife that he had decided not to run for the House seat and her response, which led him to change his mind.

“How can you expect someone else to go if you won’t,” Palmer said. “There’s a spiritual war going on in our country.”

Palmer said positions of service are often not glamorous and wear a person down.

The representative said he prays that “God will bring a great awakening that will sweep like a tidal wave” and that Christians must remember that they are a “covenant people,” originating with God’s relationship with the Jews and continuing through the Protestant Reformation and the Declaration of Independence.

“We have to take that covenantal relationship outside the walls of the church,” Palmer said.

“We all have the opportunity to impact people’s lives,” Abrams said.

The event concluded with prayer with elected officials at the various tables in the church’s worship center.