ALABASTER – A 44-year-old Cleveland man is facing a felony terrorist threat charge after he allegedly threatened to kill an Alabaster police officer and spit on another officer during a Feb. 9 incident. 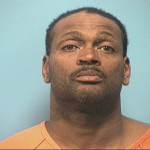 The Alabaster Police Department arrested Lavell Spates, who lists an address on Stockbridge Avenue in Cleveland, on Feb. 9 and charged him with one felony count of making a terrorist threat, misdemeanor counts of harassment and resisting arrest and a municipal violation of public intoxication.

The charges came after an incident in the 1300 block of Old Highway 31, during which Spates was under the influence of “alcohol, narcotics or other drugs to the degree that he endangered himself or another or property,” according to his arrest warrant.

The terrorist threat charge is a Class C felony, according to Alabama law, and is punishable by up to 10 years in prison upon conviction.

As of Feb. 12, Spates remained in the Shelby County Jail on bonds totaling $16,100, and he did not yet have a future court date listed in Shelby County District Court.

According to court records, Spates has a criminal history in the area, as he pleaded guilty to a possession of a felony forged instrument charge brought against him by the Hoover Police Department in 2017. As a result of the guilty plea, he was sentenced to serve 12 months in work release.