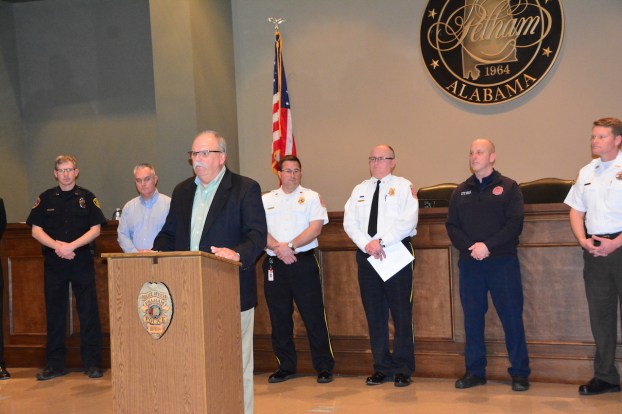 PELHAM – Pelham Police Chief Larry Palmer gave a detailed account of events surrounding the search and rescue of Chelsea resident Lisa Holman during a news conference at the Pelham police station on Monday, Feb. 12, at 3 p.m.

According to Palmer, Holman was involved in a single-vehicle wreck on Friday, Feb. 9, around 10 p.m. Palmer said her vehicle left the road, went down an embankment and struck a tree. She was reportedly driving home after attending an event in Helena.

Palmer said the piece of the road where the wreck happened has steep hill that curves at the bottom. He said several wrecks occur there.

“There was no indication that it was anything other than that,” Palmer said.

Pelham Fire Chief Tim Honeycutt said firefighters were dispatched to the wreck at 7:06 a.m. on Saturday, Feb. 10. Palmer said the call came in from a family member who went searching for Holman on Saturday morning after she didn’t return home Friday night. The relative found her wrecked vehicle and called for help.

Honeycutt said rescuers conducted an immediate search near wreck area but then requested more resources to help in the search for Holman. In addition to search teams, canines and drones were used. After establishing a command system, crews searched a 400-foot radius around her vehicle – including going door to door at homes located nearby.

“She was unconscious for some time after the wreck,” Palmer said. “My assessment is that she was probably disoriented and that’s the reason she didn’t call for help. She said there is a period of time that she does not recall.

Palmer said Holman exited her car through the back door, placing her purse, shoes and cellphone outside of the car. Palmer said she recognized her surroundings and thought she could get back to the road.

“With it being dark she just ended up off the path and got turned around,” he said. “She knew where she was. She knew the area. She was just confused as to which way to go to get to the highway. She started out thinking she was going to the highway – she went a small distance and ended up in a swampy area and realized she had gone the wrong way. She turned around to go back to the car, but she veered to the right which put her in a wooded area.”

While crews were searching for her on Saturday, Palmer said Holman was on the move as well trying to find her way. When it began to get dark, she found shelter underneath a rock and stayed there Saturday night.

On Sunday morning, 482 volunteers showed up at Chelsea High School to help look for Holman. A city of Pelham employee who works with city GIS mapping set up a grid search system which was ultimately success in finding Holman. After spending 35 hours in the woods, she was located on Feb. 11 at 8:14 a.m. about 700 feet from the wreck.

“The first search team that went into the woods located her in just a few minutes away by calling out her name and she answered,” Palmer said. “I think we witnessed a miracle. We practice these types of events and we do scenarios on a monthly basis to go over what to do when these kinds of things happen, but we also had a miracle out of that event. It’s a blessing that the mission ended the way it did.”

It was reported that one volunteer even gave Holman the shoes off of his feet.

“We were able to have a successful outcome because of the wonderful people in this community,” Palmer said. “I can’t say that enough – it was a community effort. There were so many people who contributed to the success of this mission.”

Holman suffered a broken clavicle, six cracked ribs, fractured vertebrae and a lacerated spleen but is expected to make a full recovery. She remained in the hospital on Feb. 12 recovering from her injuries but she is anxious to go home.