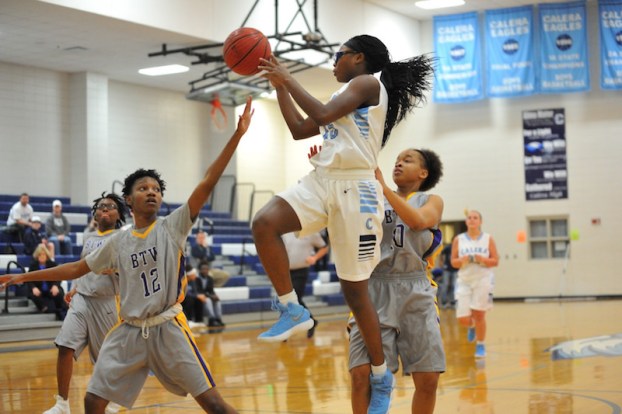 A.B. Davis dishes the ball to a teammate after being double teamed. Davis ended the game with a team-high 17 points in the winning effort. (For the Reporter/Larry Dancy)

CALERA – It was all Calera on Monday night, Feb. 12, as the Eagles looked to claim a spot in the Sweet 16 with a win on their home floor to continue a successful 2017-18 campaign.

The Eagles used an incredibly strong first three quarters against Booker T. Washington that featured at least 14 points in each, while not giving up more than nine points, which propelled them out to a 52-21 lead.

That start led Calera to picking up a 57-41 win in a game that wasn’t as close as the final score represented.

It all started in the first quarter as the Eagles came soaring out of the gate with 20 first-period points thanks to seven different scorers. A.B. Davis had five of her team-high 17 points in the opening eight minutes, while Sarah and Anna Goodwin had four points apiece.

Calera used that to spark an 11-point, 20-9, advantage at the end of the first quarter.

It was more of the same in the second quarter of the game with the exception of an even better defensive performance from the Eagles to limit Booker T. Washington to just five points.

They were able to post 14 more of their own to extend the lead to 34-14 at the half. Davis added six more in the quarter to bring her game total to 11 through 16 minutes.

Calera came out and had its second strongest quarter of the game in the third posting 18 more points on the back of Davis, who has six more points to give her all 17 of her points before the end of the third quarter.

Charley Clark also added five of her 10 points in the period thanks to one 3-pointer and a made jump shot.

The Eagles’ defense limited Booker T. Washington’s offense to less than 10 points for the third consecutive quarter as the Golden Eagles were only able to post seven points.

It led to a 52-31 lead for Calera heading into the final quarter of action, and while Booker T. outscored the Eagles 20-5 in the final period, it only made the game look closer than it actually was with the final score of 57-41.

The Eagles will now take on Central-Tuscaloosa at noon on Friday, Feb. 16, at Alabama State University.

By SETH HAGAN | For the Reporter  MONTEVALLO – The playoffs have begun in earnest, but it looked like just... read more