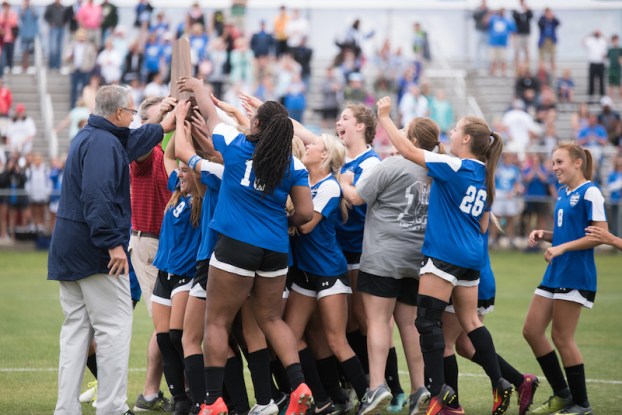 As we begin the 2018 soccer season, it’s still surreal to look back at 2017 and realize Shelby County had five state championships, seven Final Four teams and one runner-up finisher.

Now as we embark on the 2018 season, several of those teams are back and better than they were a season ago, which earned them a spot in the first Eurosportscoreboard.com coaches poll.

There were two girls teams in 2017 that won a state championship, the Chelsea Hornets and the Briarwood Lions, while the Oak Mountain Eagles came up short falling to Vestavia Hills in the Final Four.

Now all three of those teams are back and possibly just as good or better, at least according to their preseason rankings.

Oak Mountain will start the new season just behind the team they fell to last year, the Vestavia Hills Rebels. The Eagles are No. 1 in the 7A classification as they will clearly be a strong contender for the state championship thanks to several of the best players in the state back on their 2018 squad such as Nicole Payne, Hailey Whitaker and Julia Pack.

Competing in the same area as Oak Mountain will be the Spain Park Jaguars and Mountain Brook Spartans, both of who sit inside the top 10.

With the Jags coming in at No. 8 and the Spartans at No. 6, it will be one of the toughest areas to get a top two finish, which is needed to make the postseason.

Just a few spots down from Spain Park are the Thompson Warriors, who sit at No. 11 in the first coaches poll of the season.

Thompson is still a program very much on the rise and will have tough opponents in their area thanks to No. 1 Vestavia and No. 4 Hoover, but it’s a team that will make a lot of noise this season.

Chelsea was the lone 6A team from Shelby County to have success in 2017 as the Hornets won their second state championship in school history by taking down Southside-Gadsden 2-0 in the title game.

That strong play last season, along with the return of several impressive playmakers, has Chelsea in the No. 1 spot in the 6A standings. The top five of the girls 6A standings features John Carroll, Southside-Gadsden, Homewood and Pell City, all teams that can win a state championship this season, which may make the 6A title tough to come by in 2018.

Despite the loss of Sarah Adcock, coaches and many others are high on the Briarwood Lions repeating as state champions heading into the 2018 soccer season, which has the defending champs ranked No. 1 in the 4A/5A standings.

Adcock scored 10 goals in the Final Four last season, including all six in the state championship matchup, which will be tough to replace. But head coach Ryan Leib knows how to sustain success at Briarwood and shouldn’t see too much of a drop in production from this year’s squad.

While Westminster at Oak Mountain and Indian Springs were each ranked in the top five of the standings for much of the 2017 season, the two ended up meeting in the first round of the playoffs, which meant one team’s run would be cut short.

That team was Indian Springs as the Knights picked up a 3-2 win to advance to the quarterfinals. Westminster, however lost a tough 5-3 game to Montgomery Academy in the quarterfinals, who then went on to win the state championship.

While the path to the title will be just as difficult this season, it should run through those three teams as Montgomery Academy sits at No. 1, while Westminster and Indian Springs are four and five, respectively.

All seven of those Shelby County teams ranked should have a legitimate shot at winning a state championship, especially with how much experience they’ll get with rigorous schedules in the regular season.