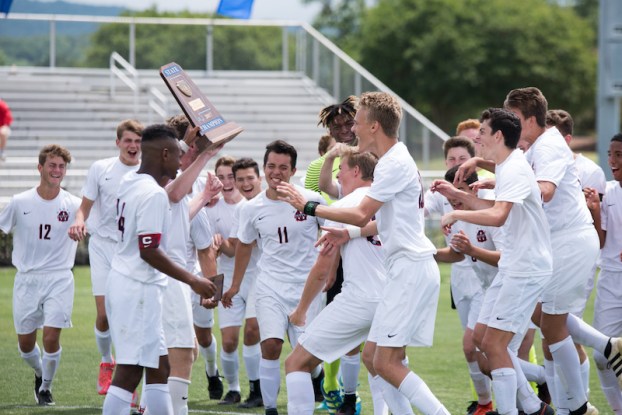 Eight teams were ranked in the first boys soccer coaches poll of 2018 with several taking the No. 1 spot in their respective classification. (File)

As we begin the 2018 soccer season, it’s still surreal to look back at 2017 and realize Shelby County had five state championships, seven Final Four teams and one runner-up finisher.

Now as we embark on the 2018 season, several of those teams are back and better than they were a season ago, which earned them a spot in the first Eurosportscoreboard.com coaches poll.

There were three boys’ teams in 2017 that won a state championship, the Oak Mountain Eagles, Pelham Panthers and Indian Spings, while Briarwood finished as the county’s lone runner-up.

All four of those teams were highly regarded when the first rankings were released on Monday, Feb. 12, while four other teams also found their way into their respective top 10.

Starting in 7A, the Oak Mountain Eagles will yet again be the favorite to bring home the 2018 state championship and that was reflected in the first rankings of the season as the Eagles grabbed the No. 1 spot in the 7A poll.

Oak Mountain won last year’s championship 2-1 over Davidson in PKs (3-0) to bring home the school’s third consecutive state title and seventh since 2005. Heading into 2018, there is no reason to think they can’t pull off the four-peat with the return of several key playmakers.

The Spain Park Jaguars and Thompson Warriors also grabbed a spot in the 7A top 10. The Jags sit just outside of the top five at No. 6 in the standings, while Thompson is just inside the top 10 at No. 9.

Both have extremely strong rosters ready to take on the 2018 season, but they also have the difficulty of an extremely tough area.

The Warriors have Hoover and Vestavia to deal with, both Final Four contenders as well, while the Jaguars have to deal with Oak Mountain and Mountain Brook. Mountain Brook is No. 1, while Vestavia is No. 2 and Hoover is No. 7 in the standings.

Despite those tough area schedules, both schools have the teams to pull off a strong run at a state championship this season.

Heading into 2018 with one of the best players in Irvin Rodriguez in the state, the Panthers grabbed the No. 3 spot in Class 6A. Pelham sits behind the team they beat in the state championship as Cullman is No. 1 in the classification, while Fort Payne is No. 2.

Briarwood’s boys ended the 2017 season in heartbreaking fashion with a tough 3-2 loss to Randolph in the state championship to finish as the runner-up in the 4A/5A classification.

Heading into the new year, the Lions sit at No. 2 just behind Randolph, but with the amount of returning players, including several stars to the 2018 roster, Briarwood may be the favorite to win the championship this season.

The Lions outscored their opponents 14-1 in the first three rounds of the playoffs last year before falling by one goal in a championship game that seemed theirs to win for the longest time.

Also ranked in the 4A/5A classification were the Calera Eagles, who found the lowest spot in the coaches poll. The Eagles should be one of the top two teams in their area, but will have a tough time handling Briarwood.

Last year, Indian Springs and Westminster at Oak Mountain were a mainstay in the rankings, before Springs went on to win the 1A/3A State Championship over Susan B. Moore High School by a final of 2-1.

Indian Spring, who is a powerhouse team in the sport, got much deserved respect heading into the 2018 season ranked No. 1 in the classification.

Just one spot lower was Westminster at Oak Mountain at No. 2 in the standings. The Knights fell in a tough 1-0 game to Bayside High School in the quarterfinals of the 2018 season, but now look to be one of the favorites heading into the new year.