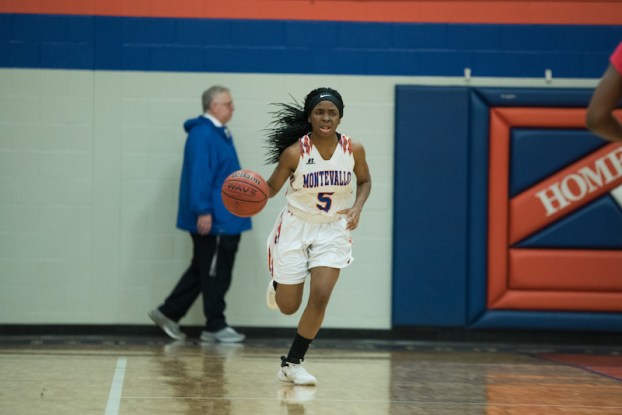 MONTEVALLO – The playoffs have begun in earnest, but it looked like just another dominant home victory for the Montevallo Lady Bulldogs as they made short work of the Beulah Bobcats in the 3A Sub-Regional by a final score of 58-24.

Montevallo had its trademark fast start and buried Beulah with suffocating defense, which was something head coach Tena Niven put an emphasis on knowing the team had to be aggressive especially with a quick turnaround from last week’s area championship win.

“We definitely wanted to bring the defensive pressure that’s kind of what we thrive on,” Niven said. “What little bit of practice we had to get prepared for this game was just working on the defensive side of things. We knew if we got through tonight we’d have a week to prepare for our next opponent in Montgomery and defense is going to be our key.”

The Bulldogs wasted no time scoring in the first five seconds off a Lauryn Lilly layup after the tip-off and quickly implemented their full-court press.

MHS forced 12 turnovers in the first quarter alone and used them to build an 18-3 lead.

Lilly scored the first six points, then fellow senior Alasha Reed got in on the action in a big way.

Reed racked up four steals in the first half and went off from long range hitting on three straight attempts from beyond the arc to total 11 points in the opening quarter.

Montevallo led 21-7 going into the second quarter, and while the defense didn’t let up the offense struggled a bit more adding just nine more points in the period.

Reed and Lilly combined for 26 of the team’s 30 first-half points, but the

turnover bug bit the Dogs as well and while they forced 20 turnovers before halftime they gave up 12 themselves.

“We were really pleased with how we came out (in the second half), because I really got onto them at halftime about how poorly the second quarter was with the turnovers and not playing good defense,” Niven said.

The second half was indeed another story as the Bulldogs nearly pulled off a shutout quarter in the third and didn’t allow a single field goal until midway through the fourth quarter.

Lilly took over once again and scored half of her game-high 26 points in the third.

Up 48-16 heading into the final frame, Montevallo was able to use its entire bench to finish the game, bolster their depth and rest the starters for the next opponent.

Niven knows they’ll have a battle on their hands in Montgomery with a familiar opponent.

“Well we know we’ll have Midfield first round,” Niven said. “We know that we have to be physical, we know we can play with them. We kind of have this competition between us anyway because we see each other often when we get to this round of (Regionals). They’re going to be physical, we

have to be more physical on defense with our half court sets we were working on tonight. And the rebounding will be key to beating them in Montgomery that’s for sure.”

The Bulldogs will meet the Midfield Patriots at Alabama State on Monday, Feb. 19.

By ALEC ETHEREDGE | Sports Editor  BIRMINGHAM – Ever since the Westminster at Oak Mountain girls’ basketball team lost in the... read more