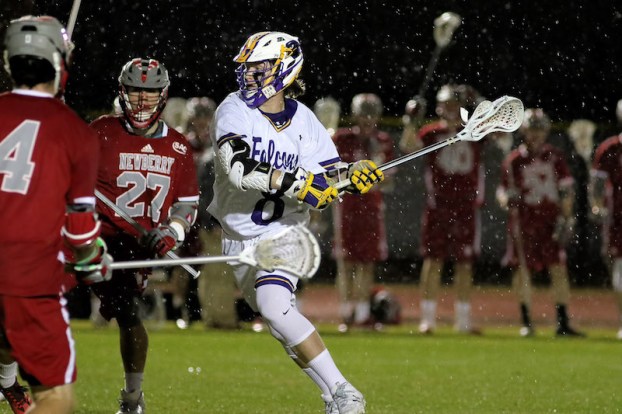 Montevallo hosted its first every lacrosse match on Friday, Feb. 9, and to the delight of the players and fans that showed up, the Falcons were able to pick up the first win in program history, 14-11. (Contributed)

MONTEVALLO – While the weather kept a lot of people away, a small crowd of 225 fans decided to take the opportunity to see a historical occasion for the University of Montevallo on Friday, Feb. 9.

For the first time in school history, the Falcons had a lacrosse team take to the Montevallo Track and Field/Lacrosse Complex as they kicked off their inaugural season and it couldn’t have gone any more perfect.

The Falcons posted 14 goals in the contest to bring home the first win in school history by a final of 14-11 over Newberry College.

The rest of the period was a back-and-forth affair, but sophomore Kyle Enkelmann was able to put up two of his game-high five goals in the period to bring the Falcons to a 4-4 tie at the end of one.

Over the next two periods of action, Montevallo outscored Newberry 7-4 to take a commanding 11-8 lead heading into the final period.

Nichols and Enkelmann continued their success in those two periods posting four total goals between the periods, while freshmen J.D. Cooper and Thomas Vaesen added one goal apiece.

In the final period, Enkelmann added two more goals, while Cooper tossed in the final goal of the night to cap off an explosive first game for the Falcons.

They played to a 4-4 tie in the final period of action, which was enough to preserve a 14-11 win for the Falcons.

Aside from Enkelmann’s five goals, Nichols added four goals, while also posting a team-high two assists in the victory.

The two freshmen also had a strong night as Cooper contributed two goals on just two shots, making his shooting percentage 100 for the night. Vaesen also added two goals and posted an assist to his box score as well.

Fellow freshman Alex Dozzi added one goal and one assist for Montevallo in his first collegiate game as well.

The Falcons are now 1-0 through one game of their inaugural season and couldn’t have asked for a better way to kick this new start off.