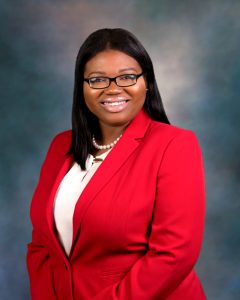 According to Robinson, working as the youngest female African-American judge has been an honor and a great responsibility.

“I’m thankful that I have the opportunity to impact the lives of other people,” Robinson said. “I’m praying that I do a great job.”

Robinson, who was elected at the age of 27, said she feels that her age will help her relate better to the younger people in the courtroom.

“More than anything, I am grateful to have the opportunity to impact the lives of young people,” Robinson said. “The lives of millennials are so very different from our forefathers, so to establish a reputation with them is vital.”

For Robinson, becoming a judge has been almost a lifelong dream.

“We had career day in the second grade, and a local judge came to my class,” Robinson said. “I didn’t know yet that you had to go to school for years and pass the bar.”

Robinson said she still has strong ties to the Alabaster community. She attended Thompson Middle and High Schools, and graduated at the age of 16. Her father, Ty Quarles, is a member of the Alabaster City School Board of Education, her mother is the owner of Alabaster business Gabriel’s Bridal and her brother is a senior at THS.

“Those were some of the best years of my life,” Robinson said of her time living in Alabaster. “It’s still my home away from home.”

Wildcats take down No. 7 Sumter for Sweet 16 berth

By ALEC ETHEREDGE | Sports Editor COLUMBIANA – Celebration ensued with students in the center of the court and a... read more