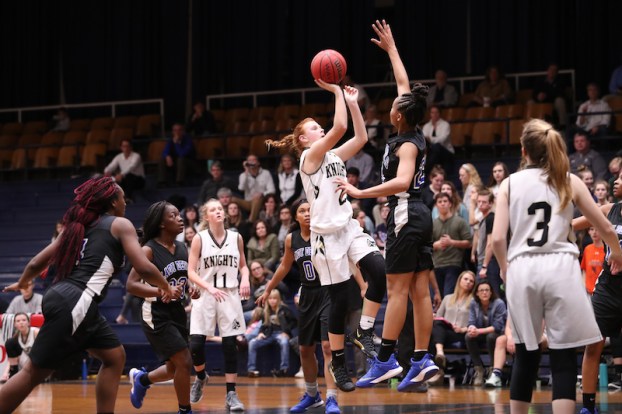 Westminster's Morgan White had 12 points and was one of two double-figure scorers for the Knights in a 60-33 win over Notasulga. (For the Reporter/Dawn Harrison)

BIRMINGHAM – Ever since the Westminster at Oak Mountain girls’ basketball team lost in the first round of the Final Four last season, the Knights have been on a redemption path to get back to the Final Four this year.

After a slow start to the season that featured a 4-5 overall record, Westminster has now reeled off 11 wins in a row after taking down Notasulga 60-33 in the Sub-Regional round of the playoffs.

The Knights (15-5) have now clinched a spot in their second consecutive Sweet 16 and sit just two wins away from reclaiming a spot in the Final Four for the second straight year.

Despite shooting woes from the free throw line, the Knights were just too much to handle as Notasulga’s best defense was just to foul and hope for the miss at the line.

Westminster was too hot from the field as they posted 26 field goals in the game, including five 3-pointers.

Gache led the way with seven points, while Mixon posted five and Price had four.

On the defensive end of the floor, Westminster held the Blue Devils to one scorer and five total points in the period to take a commanding 16-5 lead out of the gate.

While the defense kept up the pace in the second quarter by limiting Notasulga to one 3-pointer and one made free throw, Mixon caught fire for the Knights on the offensive end.

After 16 minutes of action, the Knights had grabbed a 31-9 lead at the half, which was already out of reach for a struggling Blue Devil squad.

Coming out of the half, Westminster didn’t let up as the Knights put their best offensive quarter on the board in the third quarter.

Thanks to four different scorers with at least four points, Westminster was able to post 17 points in the quarter. The defense didn’t play as strong, giving up 10 points, but by outscoring Notasulga by seven points they were able to extend their lead to 48-19 at the end of three quarters.

In the final period, the Knights were outscored for the only quarter of the game by a score of 14-12, but that didn’t even come close to erasing the deficit the Blue Devils faced as Westminster finished off a dominant 60-33 win.

Mixon led the way for the Knights with 23 points in the contest, while White’s 14 points made her the only other double-figure scorer. Just behind were Gache with nine points and Price with eight points.

Westminster will now travel to Alabama State University to take on Isabella at 3 p.m. on Thursday, Feb. 15.