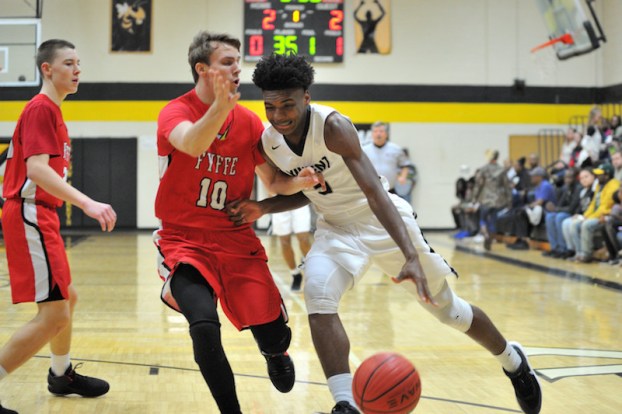 Vincent's Malik Hamilton drives on a Fyffe defender. Hamilton ended the game with nine points, while Zavien Kelley led the team with 19. (For the Reporter/Larry Dancy)

Vincent headed back to the Sweet 16

VINCENT – After a one-year absence from the Sweet 16, the Vincent Yellow Jackets are headed back to Jacksonville State University to compete in the Regional semifinals after taking down Fyffe by a final score of 53-36 on their home floor in the Sub-Regionals.

While the path ahead will be difficult as they will be forced to take on Lanett in a top-three battle, all the Yellow Jackets were focused on Tuesday night, Feb. 13, was picking up a win to advance.

It took a while for the Yellow Jackets to get going, however, as they struggled mightily on the offensive end during the first three quarters of the game, but Fyffe’s offense was no match for Vincent’s attacking defense.

In the first quarter, Vincent made just four shot and surprisingly no 3-pointers as the struggles in the frontcourt started early. The Yellow Jackets were able to post 10 points after shooting 2-3 at the free throw line as well.

That was enough to grab an early 10-7 advantage as Fyffe was only able to make three shots in the opening eight minutes of action.

Not much changed in the second quarter as both offenses struggled, but it was still evident that Vincent was the better team and too much on the defensive end of the floor.

In the third quarter, it was more of the same. Vincent did make its most shots of any quarter in the game, but hitting five jump shots, but that was only good enough for 10 points.

While the Yellow Jackets’ defense was still stingy, Fyffe was able to post its best offensive quarter of the game and tied Vincent’s 10 points in the quarter to keep from making the deficit any larger.

Heading to the fourth quarter, Vincent found itself in a much tighter game than expected leading 28-20.

Despite hitting just four more jump shots in the final period, the Yellow Jackets were able to put up 25 points thanks to some sharp shooting at the free throw line.

Vincent was able to hit 17 of its 24 free throws in the quarter, which outscored the combined point total of 16 for Fyffe in the quarter.

That difference in the final quarter made the game look a lot less close than it actually was, while Vincent’s lack of made shots also made the game a lot closer than it should have been for as long as it was.

Zavien Kelley led the way for Vincent with 19 points in the game, including 11 in the final quarter. Chris Hardie led the team on the boards with 13 rebounds in the contest.

Calera moves up, Helena and Vincent No. 2 in last poll of season