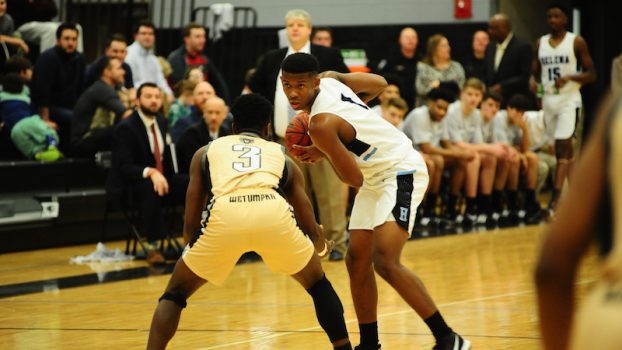 With a total of nine combined boys and girls county basketball teams making it to the Sweet 16 there are some major matchups looming between Thursday, Feb. 15 and Monday, Feb. 19. Below we will break down all of those intriguing games with the key factors you need to know.

This is a rematch of a game that Pal Bryant won 82-62 last season to end Helena’s season in the Sub-Regional round. Now Helena, ranked No. 2, and Paul Bryant, ranked No. 5, will meet again one round later in the Sweet 16.

The Huskies are currently 30-2 on the season and have one of the best records in the state, but this is the best team they will have faced all season. Earlier this year there was some trash talk from Paul Bryant players saying that Helena hadn’t played anybody and calling them overrated, now is the chance for the Huskies to step up and prove them wrong.

To make things more interesting, Paul Bryant went on to win the state championship after taking down the Huskies in the first round of the playoffs.

Now to make a bold statement, if Helena wins this game, they’ll win the Class 6A championship. That’s a tall task to ask of the Huskies, however, who will have to continue to play the defense they have played all season, but will also have to score like they did against Calera in the Jefferson-Shelby Hoops Classic.

This is the game I have been waiting to see the Vincent Yellow Jackets compete in this season. The Yellow Jackets No. 2, will be taking on Lanett, who sits just one spot behind them in the 2A standings at No. 3.

In talking with head coach John Hadder throughout the season, he has known this will be the true test for Vincent as they cross with an extremely difficult area featuring Lanett and Lafayette.

Vincent won its Sub-Regional matchup rather handily with strong defense, but will have to shoot the ball much better to beat this Lanett team.

This is a game where Chris Hardie will have to step up in the post to grab some clutch offensive rebounds and guys like Stanley Cooper, Zavien Kelley, Malik Hamilton and Jackson McGinnis will have to be knocking down shots.

Their path to the Final Four is a difficult one, but if they can win this game, then they can beat anybody in their way.

Not just one of the most intriguing girls games in the Sweet 16, but one of the more intriguing of any of the games. Spain Park has won 26 games this season and has been ranked No. 2 in the 7A classification for pretty much the entire season.

Now they’ll have the pleasure of taking on Grissom in a rematch of last year’s Elite 8 game—a matchup the Jaguars went on to win 60-46, despite some struggles early on.

Spain Park has been considered a favorite to make it back to the state championship game this season after falling to Hoover on overtime last year, and the Jags have to feel confident about their chances

Last year they limped into the playoffs struggling a little bit, but this season they have played incredibly all season and can carry over the confidence of the thrillers they won at Jacksonville last season.

While Grissom is just 11-13 this season, Spain Park will have to be knocking down shots to win this game like they should. Otherwise, it could come down to the fourth quarter.

Calera probably shouldn’t read this and head coach George Drake probably won’t like me saying this, but the Eagles have the easiest path to the Final Four of any of our county teams.

I say that for two reasons. One because they are the most athletic team in the county and two because the teams they play are very beatable.

In the first round the Eagles will take on Central-Tuscaloosa, who beat Briarwood in the Sub-Regionals. I saw that game against Briarwood, and I also saw Calera play against Briarwood. As good as Central looked in their win, Calera looked much better against the Lions.

Central won’t get nearly as many offensive rebounds against Calera as they did against Briarwood and shouldn’t hit as many deep threes as they did either.

The Falcons are a good athletic bunch, but Calera is just slightly taller and way too athletic. While Central is fast and will be Calera’s toughest test in a long time, I expect Calera to be able to push the pace in the second half to pull off the win.

We’ll stop it there for now, but in the next round, Calera would have another very winnable game should they advance.

In another top-10 battle, No. 7 Montevallo will take on No. 3 Midfield in the Sweet 16. This game will have to wait a while, however, as it won’t take place until Monday, which isn’t necessarily a bad thing for the Bulldogs as they’ll have plenty of time to fine-tune their defensive effort.

Midfield is 22-7 this season, while Montevallo is 26-5, which sets up a tremendous matchup.

To make it even more interesting, it’s another rematch game. Last season, Midfield ended the Bulldogs’ season in the Sub-Regionals in a tight 65-58 win. Now Montevallo will be searching for redemption.

If the Bulldogs can start fast and play defense the way head coach Tena Niven has preached all season, they’ll win this game. Getting behind the eight ball with a slow start, however, will spell disaster as this Midfield team can score points in a hurry.

The Patriots have scored 96, 82 and 71 points in their last three games. So if you didn’t catch on in the first five paragraphs, defense is the key for Montevallo in this one.

On paper, Central-Tuscaloosa is the favorite to win this game. They have the better record, are ranked and have a solid team that made it to the Elite Eight last year.

But Calera isn’t going to let that phase them. The Eagles have been playing well behind players like A.B. Davis and have ended the season with a load of confidence, but like Montevallo, if Calera wants a win in the Sweet 16, it starts on the defensive end.

Central may be more talented, but if the Eagles can control the game on defense and limit offensive possessions for the Falcons, they’ll have a chance.

It’s also a game where attacking the rim and getting the ball inside will be key. If they can draw some fouls and get Central in foul trouble early, then Calera will be in the game until the end.

Shelby County made it to this point last year, but went on to lose to the team we just mentioned (Central-Tuscaloosa) 56-30 to keep them from the Elite Eight.

They’ll be taking on a Marbury team that is extremely good and coming off a 66-46 win over Valley in the first round.

That being said, Shelby County isn’t just better than they were a year ago, but is coming off a strong 68-56 win over No. 7 Sumter Central.

The Wildcats looked extremely good on both ends of the floor in that game and if they play the same way in their upcoming game, they’ll advance to the Elite Eight.

Not allowing second-chance opportunities and forcing turnovers will be key in determining the winner of this game. While Maggie West and Nataley Whitner can knock down 3-pointers, this team can be really good with Aaliyah Cotton and Skye Knighten-Lilly on the fast break.

Isabella is 20-3 overall this season, but this is a game that Westminster should be the favorite to win.

While Westminster is 15-5 overall, they have played a much more difficult schedule and were in this position last year as they made a run to the Final Four.

Now with pretty much the same exact team back and ready for a strong postseason run in 2018, I would expect nothing short of another Final Four berth.

Isabella snuck by a Winterboro team in the first round of the playoffs that finished the season 11-12 overall by a final of 68-64. The Knights already have a 60-33 win under their belts and that was with poor free throw shooting.

This Westminster team loves to grab the rebound and push the ball, which leads to a lot of easy transition baskets or fouls. If they are making free throws it should be an easy win for the Knights.

Similar to the Helena boys, the girls are going to have one of the toughest matchups of any county team in the Sweet 16 as they square off against No. 5 Hillcrest-Tuscaloosa.

That won’t stop the Huskies from trying to shock the state in the first round and all it takes is strong defense. Any time your team is an underdog, you can come out and out-hustle and out-physical the other team.

The Huskies are definitely athletic enough to do that, but just have the factor of youth on this year’s team. Those young players have grown up a lot over the last couple of weeks and will now have to step up to play the most exhausting game of their lives to pick up a win.

The Patriots put up 91 points in a 91-42 win in the first round, which shows the need to play strong defense because they can score points in a hurry.

By ALEC ETHEREDGE | Sports Editor  BIRMINGHAM – Ever since the Westminster at Oak Mountain girls’ basketball team lost in the... read more