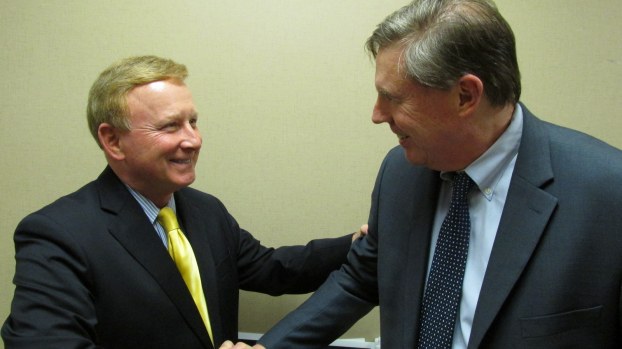 By Michael J. Brooks / For the Reporter

PELHAM – WVUA-TV manager Mike Royer said his work with University of Alabama broadcast students has been very rewarding, and he wants students to enter the market well-trained, reporting the facts and letting the people decide.

Royer worked for 35 years in Birmingham at TV stations WBRC and WVTM before moving to WVUA on the campus of the University of Alabama in 2016. Prior to relocating to Birmingham, he worked for five years in his native Indiana where he was named “Broadcaster of the Year.”

“I retired in Birmingham, but soon retirement began to feel like unemployment!” Royer said with a laugh. “Then I got this great opportunity to pour my life into a small group of journalism students at the university. I had 17 last fall and 15 this spring. This is the best part of my career.”

Royer said he teaches journalists to be like Walter Cronkite.

“We watched Cronkite all those years and never knew his politics,” he said. “It was only at the end of his career that he made a comment about the futility of the Vietnam War, and in his later writing we learned his politics. I think journalists should follow his example without mixing in their personal opinions.”

Royer said he hopes to influence a new generation of students in his present job. He said studies indicate young people spend up to nine hours a day “on some type of screen.”

“Our young people need to learn to put the screens down, look others in the eye and communicate with them,” he said. “And they need to learn about government and participate in it.”

Royer said his father did this for him.

“Dad made me stay up and watch the Kennedy-Nixon debates when I was eight years old,” he said. “He also cut out pictures of the presidential cabinet officers and posted them in my room so that I’d learn their names. We went to D.C. and he told me to memorize the words inside the Lincoln Memorial. I did, and I still know them. I’m grateful for what my dad did for me.”

Royer said his mother wasn’t much for public speaking but did share a word at their golden anniversary dinner some years ago.

“Mom said, ‘If I’d have killed my husband the first time I ever thought about it, I’d be out of prison by now!’”

Royer said he filmed “The Spirit of Alabama” for more than 20 years through which he met and interviewed fascinating people throughout the state.

“New management came to Birmingham and didn’t want these reports, only the news,” he said. “But now my students at Alabama do these programs.”

Royer said two fascinating men he met over the years impacted his life.

“Lou Wheeler taught me to move from success to significance,” he said. “He told me success is easy, and that’s fine. I’m a capitalist and I want everyone to do well. But he said significance comes when you make life better for others through civic clubs, churches and politics.”

And Royer mentioned the late Dr. Jim Collier of Brookwood Hospital. When Royer met him, Collier was dying of cancer.

“He was in a wheelchair and on oxygen,” Royer said. “He was a man of faith. He told me, ‘Jesus was all I needed until Jesus was all I had.’ What a commitment!”

Royer said in his interview he asked Collier about his prognosis.

“My prognosis is the same as yours,” the physician replied.

“He was right,” Royer said. “We’re all mortal, so today is important. We must appreciate every day more fully and make tomorrow the best day ever. That includes saying ‘I’m sorry’ to those who need to know and ‘I love you’ to those we do.”

PELHAM – The state’s best school bus drivers were recognized for their dedication and hard work at the ninth Love... read more