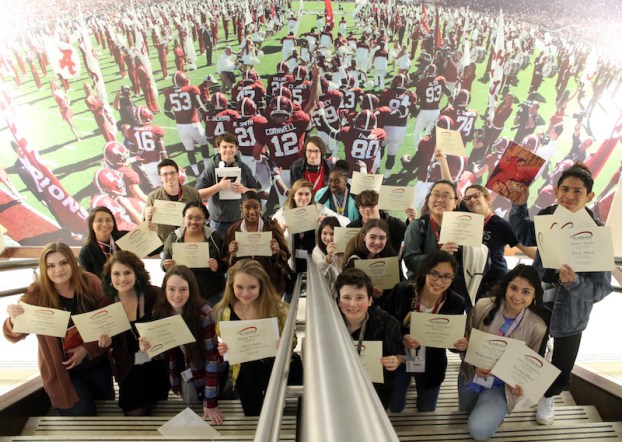 All day—from 7 a.m. arrival until well after 4 p.m. in Tuscaloosa—I’ve been impressed with PHS Communication. Yearbook Adviser Kim Hinds, who also teaches art and photography, was texting me before 7 to be sure that I had documents to travel with a student we share with health issues. Broadcast Adviser Melissa Brown met her students even earlier to issue cameras for onsite competition beginning once we arrived at the University of Alabama.

When I messaged Hinds in December to remind her of the ASPA yearbook competition mailing deadline, her response was, “Already sent it off. Thanks for the reminder!”

Knowing that Brown’s Broadcast crew was in its infancy and sending large video packages in December would be impossible, I suggested onsite and carry-in competitions. “We’re working on the carry-in and we want to do the onsite,” she shared. “We’ve been on the website and studied the categories.”

Both advisers were one step ahead of me even though these two strong teachers have only been working with their groups a couple of years and a few months respectively. Session leaders weigh in on the spirit award identifying students who are most excited about their communication work—and PHS kids emerged victorious.

While the Lit Mag shines a light on the arts, the yearbook documents every school group and broadcast captures the school year in motion. Clear communication and effective documentation remind us of our strengths and propel us into the future—prepared to celebrate Pelham High School.

By CONNIE NOLEN / Community Columnist “This will be our 14th Write Night. Write Night belongs to the students. I’m... read more