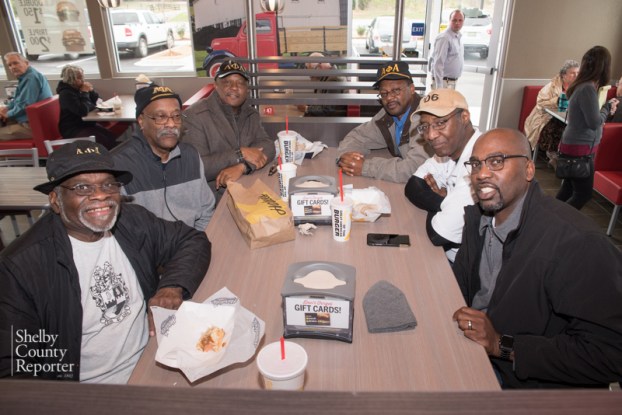 A group of friends stopped in Monday for a bite to eat. (Reporter photo/Keith McCoy)

ALABASTER – The new location of a popular fast food restaurant opened its doors for the first time to a large crowd of people in Alabaster on the morning of Monday, Feb. 12. Up to 100 people flocked to the new Hardee’s restaurant on Alabama 119 to be among the first people to enjoy a meal there.

A shiny plaque on the wall proudly stated that the new location is a franchise that is independently owned by GBL Investments, Inc. of Birmingham.

While he wished the building had a little bit more space, Alabaster resident David Morrison said he was thrilled to have a new dining option for breakfast, lunch and dinner nearby.

“Hardee’s is actually one of my favorite restaurants,” Morrison said. “I especially like the charbroiled seasoning they use.”

While they love eating at Hardee’s, residents Jesse and Deborah Pilgreen said they had to drive long distances to eat there before the Alabaster location.

“We’ve been going to the one in Calera, and that’s a bit of a drive,” Deborah Pilgreen said.

Jesse Pilgreen said the restaurant’s centralized location on near Thompson Road will likely attract a lot of business from the city’s young people and parents.

“It’s close to the schools and there’s a lot of traffic here,” Jesse Pilgreen said.

Deborah Pilgreen said she and Jesse live close by, and had anticipated its opening since plans were announced of its construction in 2016. They were so excited that they got up early to eat breakfast at Hardee’s at its original planned opening time of 5 a.m. Once they arrived, she said they discovered that the restaurant was not set to open until 11 a.m. and decided to come back later for lunch.

“We watched everything go up, and we were actually out here at 15 ’til 5 a.m., because we thought it would be opened, but they changed it,” Deborah Pilgreen said. “It was almost like Black Friday shopping.”

Despite the delay and the large lines, Deborah Pilgreen said she enjoyed her meal and her interactions with the newly hired employees.

By ALEC ETHEREDGE | Sports Editor MONTGOMERY – After falling in the Sweet 16 in 2017 to Central-Tuscaloosa and the... read more