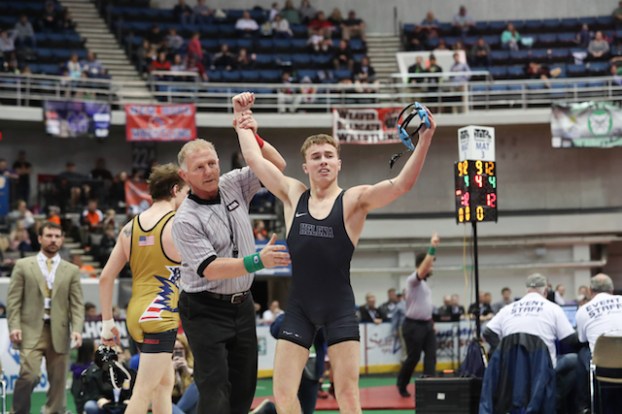 Alex Miller has his arm raised in the air after being crowned the 6A state champion in the 138-pound weight class. He and Nathan Dunaway both won individual titles for Helena. (For the Reporter/Dawn Harrison)

HUNTSVILLE – For much of the season Alex Miller and Nathan Dunaway looked like two of the best wrestlers in the state and seemed like two heavy favorites to pick up a state championship.

With the weight of proving that hype, the two went to Huntsville’s Von Braun Center from Feb. 15-17 and backed it up with strong performances on the mat.

Those two became the only two local Class 6A wrestlers to win an individual state championship this season to complete a strong 2017-18 campaign.

Miller was able to pick up the win in the 138-pound weight class with relative ease. He picked up a pin in the first round to advance to the quarterfinals.

In that quarterfinal matchup, Miller had his biggest challenge, but still won with a 19-9 major decision. He then went on to pick up two more pins in the ensuing semifinal and championship round to bring home the title.

Dunaway started his run in the 182-pound division with two consecutive pins to advance to the semifinals where he picked up a 5-1 decision win.

He carried his confidence from the first three matches into the championship round where he grabbed a 6-2 decision win to cap his season off with a state championship.

Those two wrestlers were part of an effort that gave the Huskies one of their best team performances of the season, which led to an overall finish of seventh in the team standings with 87 points.

Will Miller and Cole Pugh also helped rack up several of those team points with finishes of third and fourth, respectively.

Miller won his first two matches with decisions, before falling in the semifinals with a heartbreaking disqualification that ended his bid at a state title.

He was able to rebound, however, to pick up back-to-back major decision wins and take third place in the 106-pound weight class.

Pugh lost his first match with an 11-5 decision in the 195-pound weight class, but was able to rebound from the uphill battle he had given himself.

He went on to win four consecutive matches, three with decisions and one with a sudden victory, to advance to the third-place match. In that third-place match, however, Pugh’s luck ran out.

But it wasn’t due to lack of effort as he battled to overtime, before losing a gut-wrenching sudden victory to Oxford’s Matthew Muncher.

Chelsea had a strong North Super Sectional, finishing in second at the event, but didn’t have as strong of a showing at the state meet.

The Hornets did end up with three wrestlers in the top six of their respective weight class, however.

Brantley Ledbetter finished in fourth in the 126-pound division to tie for Chelsea’s highest finisher. He used a pin and two decisions in his three wins, and lost his two matches both by decision.

The person he tied with was Clint Glaze, who finished fourth in the 152-pound weight class. His three wins included a sudden victory, a pin and a decision, while his two losses came via pin and decision.

Behind those two top-four finishes, Caleb Gore finished in fifth in the 195-pound weight class.

His three wins included a pin, a decision and a forfeit, while his losses came by pin and decision.

Sam Ingram capped off his impressive season by sixth in the 170-pound weight class. He picked up a pin and a decision in his two wins, while he lost in three other matches.

Chelsea finished 12th in the team standings with 64 points.

For the Pelham Panthers, Bryce Wanagat and Joseph Chimento took advantage of qualifying for the state championships by finishing in the top five of their respective weight classes.

Wanagat was the higher of the two as he finished in fourth in the 120-pound weight class with two decision wins, one pin and one sudden victory.

Chimento finished in fifth in the 170-pound division by capturing two pins, two decisions and a sudden victory.