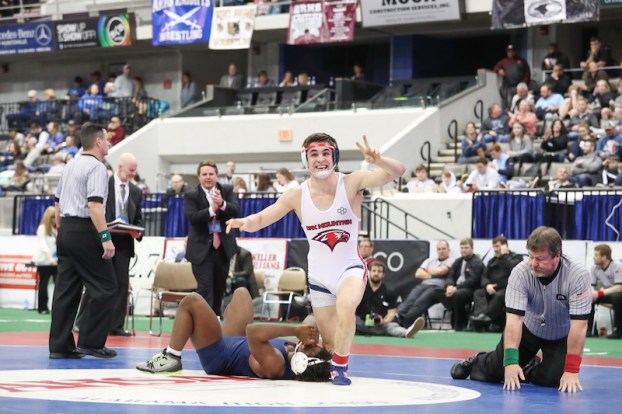 HUNTSVILLE – After sneaking into the AHSAA State Wrestling Championships by finishing fourth in the South Super Sectional to qualify right on the number for the state meet, Oak Mountain made the most of its opportunity by finishing third with a total of 84.5 points.

Heading into the final day of the event on Saturday, Feb. 17, at Huntsville’s Von Braun Center, Thompson, Central-Phenix, Vestavia Hills and Hoover all seemed to be favored over the Eagles, but that didn’t matter.

While Thompson won the team title with 120 points and Central-Phenix City finished second with 93 points, Oak Mountain was just one spot lower in third as they shocked teams like Hoover and Vestavia with their tenacity in the most important matches of the season.

The Eagles were able to claim that third spot in the standings thanks to some great individual efforts that led to five top-four finishes, four top-three finishes and two individual state champions.

Those two individual champions were Barrett Blakely and Sullivan Tipton, who both came into the match with the expectation of competing for an individual title.

Blakely’s win gave him an individual state championship for the second consecutive year as he defended his title. Last year, Blakely competed in the 160-pound division, while in 2017-18 he jumped up to the 170-pound division.

That weight difference seemingly had no effect on him at the state meet—or at any other point this year—as he capped off a perfect 53-0 season with three straight wins for the title.

Blakely was able to pick up a technical fall win in the quarterfinals, before stringing together two consecutive pins in the semifinals and the championship match.

After pinning Buckhorn’s Jordan Hunter in the title match, Blakely was overcome with happiness and immediately jumped up grinning and holding up two finders on each hand to signal his second straight championship.

After losing to Thompson’s Sam Latona in the championship last year, Tipton was looking for some redemption heading into his state championship run in the 120-pound weight class.

Tipton took advantage of Latona being injured and ran away with the championship this year. He was able to get a win by way of medical forfeit in the first round and then went on to beat Sparkman’s Cordell Ellison with a pin in the semifinals.

In the championship match, Tipton won a tight 4-3 decision over Hoover’s Rilly Huff to redeem last year’s loss in the title round.

Thomas was able to finish third in the 113-pound weight class. He won his quarterfinal match with a pin, but then lost an 8-1 decision in the semifinals to force himself into the consolation bracket.

Thomas then went on to win two consecutive matches, one with a pin and the latter with a 3-1 decision, to finish third in the weight class.

Cruce’s path looked extremely similar in the 138-pound division. He won his quarterfinal match in a 6-5 decision, but then went on to lose in the semifinals by way of a 7-4 decision.

After that loss, Cruce went on to win his consolation semifinal match with a 9-0 major decision and followed that up with a 4-1 decision win in the consolation championship match to finish in third in his weight class.

Justin Evans, wrestling in the 160-pound weight class, got himself in an uphill battle after losing a sudden victory in the quarterfinals.

Evans was able to bounce back from that opening loss to post a major decision win and a decision win to get himself into the third-place match, which guaranteed him a finish of fourth.

He wasn’t able to win the third-place match as he fell in a 5-2 decision, but was able to take home the fourth spot in the weight class.

Early in the season, Oak Mountain struggled slightly and might not have been wrestling at the level they wanted to, but the Eagles bounced back to become one of the three best teams in the 7A classification by the end of the season.

By ALEC ETHEREDGE | Sports Editor HUNTSVILLE – After a two-year hiatus, the Thompson Warriors’ wrestling program was back on top... read more