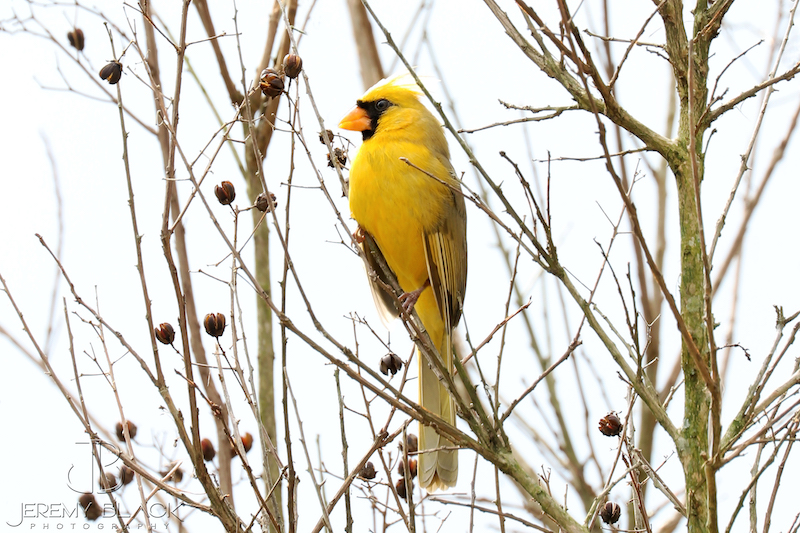 Alabaster resident Charlie Stephenson is the first person to report sightings of an extremely rare yellow American Northern Cardinal with a pigment mutation in Shelby County. (Jeremy Black/For the Reporter)

ALABASTER – An Alabaster resident and bird enthusiast has recently been receiving visits from an unexpected, but very welcome, guest.

According to Charlie Stephenson, a rare American Northern Cardinal with a pigment mutation first appeared in her back yard in late January, and has been spotted there almost every day since.

When Stephenson first spotted the bird, she knew it was different from other cardinals because of its yellow feathers. Stephenson said this is the first known sighting of a bird like this in Shelby County.

“I was looking out the window and I saw it eating,” Stephenson said. “I realized that it was a cardinal and I ran to get my camera. I managed to get a quick photo before it flew up to high branch.”

After she contacted Auburn University biologist Geoffrey Hill, she learned that spotting a cardinal with this type of pigment mutation is an extremely rare occurrence. Yellow American Northern Cardinals are typically only seen once a year in the United States, and one has not been documented for the past five years.

“Of all the places, he’s in Alabaster, Alabama,” Stephenson said. “I wonder how many people have actually seen the bird and not thought anything of it.”

She said there is a species of bird known as the Yellow Cardinal that is native to South America, but those birds have different coloring and markings.

Since it first appearance, Stephenson said she has seen it in several places close to Buck Creek Park and Warrior Park and other yards, in addition to her own.

Stephenson said she is unsure of what keeps attracting the cardinal, but that it might have something to do with several bird feeders she has in her yard.

Stephenson said the bird is a fully-grown male, and is observing his behavioral patterns and interactions with other birds. Any feathers that Stephenson finds will be donated to a research program at Auburn.

“He exhibits typical cardinal behavior, and he looks very healthy,” Stephenson said. “We’re just observing and trying to take as many notes as possible.”