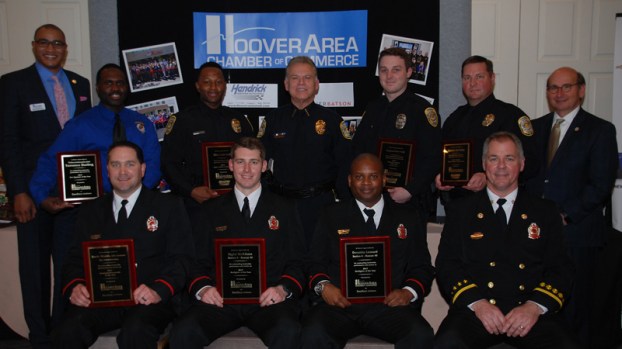 HFD includes 178 employees and 10 stations responding to about 11,000 calls for service annually.

About two-thirds of those calls are emergency medical services, but Bentley stressed firefighters do much more.

“We’re there to help in any situation you have,” Bentley said.

Several of the awards presented were related to an incident in September 2017 in which a man was threatening to jump from the Lorna Road bridge onto Interstate 459.

Deramius Leonard and Taylor McAdams were named Firefighters of the Year for their efforts to prevent the man from killing himself.

“If these two gentlemen, along with Hoover Police Department and other firefighters, had not been there that day, the situation would not have turned out as good as it did,” Bentley said.

Barrie Woods was named Paramedic of the Year.

While delivering supplies to the fire station in Greystone as part of his duties as an EMS assistant, Woods came across a vehicle that had struck a utility pole, and the driver was not breathing and had no pulse, Bentley said.

Hoover Police Chief Nick Derzis was next to present awards, noting that the department includes 182 officers and 64 civilian employees, and that the communications center receives about 164,000 calls per year.

Crimes including theft, burglary, and breaking and entering have decreased significantly in the city, Derzis said.

“I attribute the reduction to the hard work of our personnel,” Derzis said.

Drew Neal was named Corrections Officer of the Year.

Neal inspected a letter from an inmate that appeared to have cut edges, and after a search of the inmate’s cell, a razor blade was discovered.

Terrance Darling was named Communicator of the Year, with Derzis noting his calm demeanor during high-stress situations and specifically mentioning an incident where Darling dispatched police to a burglary in progress that resulted in an arrest.

Cedric Acoff was named Police Officer of the Year in part for his efforts during the situation with the suicidal man, as the officer grabbed the man’s clothing through a fence and held him until he could be restrained,” Derzis said.

“The officer’s quick thinking prevented a tragedy from happening,” he said.

The second nominee for the award was Chad Godsey, who Derzis said received a report about a father molesting his daughter that resulted in an extensive investigation and felony charges.