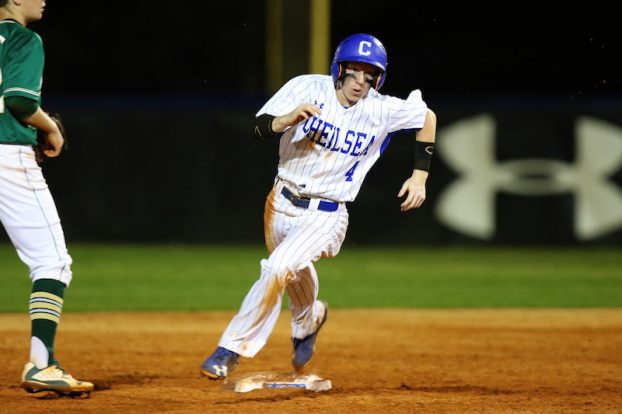 Chelsea went 2-0 on opening day thanks to two wins by a combined three points over Prattville. (File)

CHELSEA – It wasn’t easy, but the Chelsea Hornets were able to pick up two opening-day wins on Monday, Feb. 19, on their home field against the Prattville Lions.

Despite winning two close games by a combined score of 12-9, the Hornets, who made a surprising run to the quarterfinals of the playoffs last year, were ready to get the season underway and their excitement showed on the field.

With 23 upperclassmen back on its team this season this Chelsea team is going to be tough to beat this year and it showed in the first two games of the season.

To say the season couldn’t have started any wilder for either team is an understatement to what happened in the first game of the double header.

Chelsea scored the game’s first run in the bottom of the third thanks to two errors and a sacrifice bunt. Eventually Nolan Forehand was able to score on the second error to give the Hornets a 1-0 lead.

That was the only run for the first 5.5 innings of the game as it was a well-pitched defensive game, but in the final 1.5 innings of play, both offenses caught fire.

It all started in the bottom of the sixth as Chelsea was able to add to its lead with three more runs. The Hornets strung together a walk, an error, a single, a hit batter a sac fly and another single to bring home those four runs and take a 4-0 lead into the final inning

All the Hornets needed was three outs with that large lead to preserve their first win of the season.

Getting those final three outs proved to be too much, however. After an opening strikeout from Riley Watkins, he proceeded to walk four consecutive batters, one of which brought in Prattville’s first run of the game.

Head coach Michael Stallings then decided to make a pitching change to go with Sam Towery, who hit the first batter he faced to bring in another run.

With Chelsea now up 4-2, Towery was able to strikeout the next batter he faced to put the Hornets one out away from the win. Prattville, however, was able to bring home three runs in the next at bat without even picking up a hit.

A wild pitch allowed the first run to score, before a fielding error allowed two more runs to score. All of a sudden, Chelsea found themselves down 5-4 and having to score in the bottom of the seventh to tie or win the game.

It didn’t take long for the Hornets to star threatening as strung together a walk and a single in the first two at bats to put two runners on.

Following a groundout, Sam Towery hit a hard ground ball that allowed both DeWeese and Carter Frederick to score for the walk-off win.

Six different Chelsea players had a hit in the game, while Towery ended the game with two RBIs. Will Hayes, Forehand and Bennett Horton also added an RBI apiece.

Brendon Case tossed the first six innings and allowed just one hit and no earned runs, while striking out seven batters in an impressive first game of 2018.

Chelsea played from in front for the majority of the second game of the double header and went on to win by a final of 6-4.

Prattville struck first in the top of the second as Chelsea gave up a run to get a double play, but the Hornets answered back quickly.

In the bottom half of the inning, Chelsea went on to score three runs thanks to a fielder’s choice, an RBI single and a sac-fly. The Hornets ended up with a 3-1 lead at the end of the second inning.

They added to that lead in the bottom of the third thanks to an RBI single from Horton that brought home William Root.

The Lions got within one run in the top of the fifth, but Chelsea scored in both the bottom of the fifth and sixth innings to extend the lead back to three, before holding on for the 6-4 win.

Marcus Moody led the Hornets in the game going 2-for-2 with two runs scored offensively. Horton added two RBIs of his own, while Stephen Fant and Hayes each picked up one. Five different players had a hit for the Hornets in the win.

Emmitt Hudspeath got his first start of the season on the mound in the game went four innings allowing just two hits and no earned runs, while striking out seven batters faced.