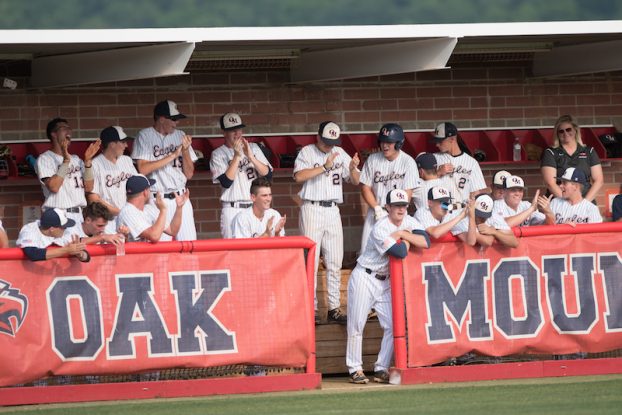 The Oak Mountain Eagles' baseball team started the season 2-0 with wins over Stanhope-Elmore and Homewood on opening day. (File)

NORTH SHELBY – The Oak Mountain Eagles can make a strong case that they are the favorite to win the 2018 Class 7A State Championship with the amount of talent they have back and on Monday, Feb. 19, the Eagles opened the new season on their home field looking like a strong contender for the title with a 6-0 win over Stanhope-Elmore and a 7-3 win over Homewood.

Both of those teams were strong Class 6A playoff teams in 2017, while the Eagles were one of the strongest 7A teams last season, which pitted a lot of impressive talent and state-championship contenders against each other on opening day.

One reason the Eagles are so highly touted coming into the 2018 season is the starting rotation of pitchers that features Gene Hurst and Jackson Kimbrell.

Both of those guys picked up wins and combined for 14 strikeouts and gave up just three hits and one earned run to propel the Eagles to a 2-0 record.

Hurst got the start in the first game of a double header to kick off Oak Mountain’s season, but it was the offense early in the game that gave Hurst plenty of breathing room.

In the bottom of the first inning, Oak Mountain was able to take advantage of two consecutive walks and a hit batter to load the bases with no outs.

A groundout from Landon Cato and drove in one run, while Andrew Heiberger drove in two runs with a hard ground ball to right field. The fourth and final run of the inning came on a wild pitch that led to Heiberger crossing the plate to give the Eagles a 4-0 advantage after one.

That lead was all Hurst needed as he was in the zone on the mound all afternoon. He allowed just one hit in five innings pitched and struck out seven, while Boston Smith came in to finish the game off with two scoreless innings to complete the shutout effort and a 6-0 win.

The second game of the double header featured a tighter contest for 2.5 innings of the matchup, before Oak Mountain was able to score four unanswered runs between the bottom of the third and fourth innings to run away for a 7-3 win over Homewood.

The Patriots actually struck first in the top of the first inning after a dropped third strike allowed Patton to cross the plate for Homewood.

Like the first game, Oak Mountain got off to a fast start posting three runs in the bottom of the first inning to answer Homewood’s run in the top half.

The Eagles started the inning with a walk from Dylan Fraser and a sigle from Caleb Ragland, before a Cato groundout and a Heiberger single brought home Oak Mountain’s first two runs of the game to take a 2-1 advantage.

Two walks followed Heiberger’s single, which loaded the bases. It forced Homewood’s pitcher to be perfect on the mound, but instead he committed an error, which allowed Heiberger to score and give Oak Mountain a 3-1 advantage after one inning.

Oak Mountain started playing its best baseball after that, however, as Heiberger continued his strong day at the plate with an RBI double in the bottom of the third to give the Eagles the lead right back.

They added to that lead with back-to-back RBI singles in the bottom of the fourth from Ragland and Kimbrell to take a 7-3 lead, which was more than enough insurance.

Kimbrell ended up finishing the game after pitching 4.1 innings. In his time on the mound, Kimbrell allowed just two hits and one earned run, while striking out seven of the batters he faced. Hunter Hall tossed the final 2.2 innings and had three strikeouts in that span.

By ALEC ETHEREDGE | Sports Editor ALABASTER – The Thompson softball team went 31-11-3 in 2017 to give the program... read more