Leecarto Jacquez Seawright, 18, who lists an address on North Sutherland Drive, was charged with attempting to elude law enforcement, reckless endangerment, assault in the third degree and failure to aid with a damaged vehicle while he was being held at the Shelby County Jail. 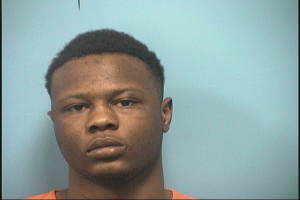 According to court documents, Seawright and another suspect, Ladarius Tyshun McDade, allegedly robbed a victim in a parking lot in the South Promenade in Alabaster before leading police from Pelham, Alabaster and Calera on a high-speed chase that ended in Calera on Tuesday, Feb. 13.

During the high-speed chase, Seawright allegedly exited Interstate 65 on an entrance ramp and sped to downtown Calera, where he hit another vehicle head-on. Seawright and McDade allegedly exited the vehicle and attempted to enter another to escape before leaving the scene on foot. They were apprehended by the Calera Police Department shortly afterward.

His arrest warrants state that the vehicle Seawright struck was knocked into a nearby storefront, which caused injury to the driver and damage to the building.

Attempting to elude law enforcement is a Class C felony, and reckless endangerment, third-degree assault and failure to aid with a damaged vehicle are Class A misdemeanors.

COLUMBIANA – A Chelsea man was recently put behind bars after on two counts of violating the Sex Offender Registration... read more