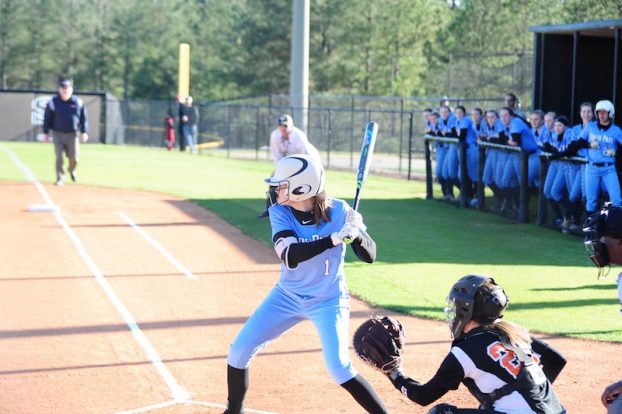 The Spain Park softball team won its opener with a walk-off home run from Savannah Rogers in the bottom of the eighth inning. (File)

HOOVER – In 2017, the Spain Park softball team won 47 games after posting just nine losses, but the team fell short of its ultimate goal of a state championship.

The Jaguars now have one win in 2018 with that same goal in mind of winning an elusive state championship after opening the new softball season with a 4-3 win over Southside-Gadsden on Monday, Feb. 19.

It didn’t come easy for Spain Park in the first game of the season, however, as Southside make the Jaguars work extremely hard for an opening-day win, but a two-run walk-off home run from Savannah Rogers gave the Jags the win.

Tied 2-2 at the end of seven innings, Southside was able to jump in front in the top of the eighth thanks to two early singles. Kaylee Brown had the first single and then went on to steal second to put a runner in scoring position.

Brown then advanced to third two batters later after a single from Rylee Gattis drove her over.

With one out in the inning, Karlee Thompson hit a ground ball to second base that allowed Brown to come home for the go-ahead run. Southside was unable to add anymore insurance in the inning as Spain Park went to the bottom of the eighth trailing 3-2 and needing a run to keep the game going.

Annabelle Widra started the inning with a single to give the Jags some early hope.

Caroline Wooley and Lindsay Parker both popped out in the next two at bats to bring Spain Park to its final out of the game.

That’s when Rogers stepped to the plate. In a 3-1 hitters count, Rogers saw the pitch she wanted and sky rocketed the ball over the fence for a walk-off winner on opening day for the Jaguars.

The Panthers started fast in the top of the first inning to show they were for real from the opening pitch.

Emilee Coker and Lauren Hunt started the game with back-to-back singles for Southside. Coker picked up the first single, then proceeded to steal second during Hunt’s at bat to put a runner in scoring position with no outs.

Hunt then laid down a ground ball up the middle that brought Coker in for the game’s first run.

That was all of the action in the first two innings, until Spain Park finally freed up at the plate in the bottom of the third.

Going into the inning still down 1-0, the Jags were able to get a lead-off double from M Thompson. Southside was able to get two outs after that, but Spain Park then strung together a single, a walk and another single to score two runs and take the 2-1 advantage.

While both teams threatened again throughout and totaled 10 hits apiece in the game, no runs were scored over the next three innings.

In the top of the seventh, however, the Panthers were able to tie the game in clutch fashion.

Down to its last out with a runner on second base, Sydney Yancey singled on a line drive to center field to drive home the game-tying run to force extras.

The Panthers went on to take the lead in the eighth inning, before Spain Park pulled off the walk-off from Rogers.

Widra finished the game 3-for-3 with two runs scored and one RBI to pace the Jaguars. Parker was 2-for-4 at the plate with an RBI and Rogers finished 1-for-4 with the walk-off homer.