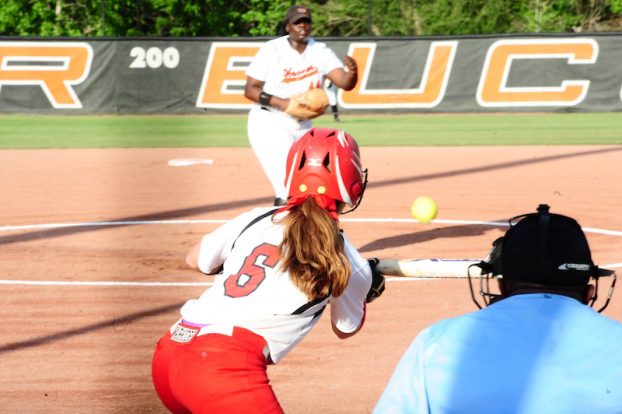 Thompson was able to pick up three consecutive wins on Monday, Feb. 19, to start the 2018 softball season 3-0. (File)

ALABASTER – The Thompson softball team went 31-11-3 in 2017 to give the program a huge step in the right direction and show that the Warriors can compete for a state championship.

Through three games of the 2018 season, that trend upward is continuing as the Warriors outscored its three opponents in the Thompson Invitational held at Alabaster’s Veterans Park 27-4 to start the season an impressive 3-0 on Monday, Feb. 19.

The Warriors got off to a flying start in the first game of the year as they put up three runs in the top of the first inning to take a quick 3-0 lead on the Moody Blue Devils.

It’s a lead they didn’t relinquish the remainder of the game as they gave up one run in the bottom of the first, but just three more hits the rest of the game and no runs.

That strong first inning was due to a walk from Kindall DeRamus to start things off, followed by three straight singles from Lauren Haskins, Kennedy Foote and Madison Bubel to drive in three runs.

Bubel led Thompson going 1-for-3 at the plate and driving in a game-high two RBIs. Haskins finished the game 2-for-3 and scored two runs, while driving in one run.

Bailey Whitfield got the win in the circle going all five innings, allowing just four hits and one earned run, while striking out five.

Thompson continued the trend of fast starts in its second game of the day against Leeds by driving in four runs in the bottom of the first inning.

That strong start combined with seven runs in the third led to the Warriors running away with a 12-1 win.

It wasn’t just in the batter’s box that Thompson did its damage, but in the circle as well. Mikayla Touhey and Madison Holtzapfel combined to toss a no-hitter in the shortened five-inning game.

Touhey went four innings and allowed one unearned run, while Holtzapfel came in for the save and picked up three consecutive strikeouts to close the game out.

Haskins continued her strong play at the plate in the game going 3-or-3 with two runs scored and one RBI. Touhey and Foote both went 2-for-2 at the plate with two RBIs apiece. Foote also scored three runs, while Touhey crossed the plate twice.

Also of note was Allie Miller, who picked up her first hit as a Thompson player and added two RBIs in the win.

In the final game of the day, looking to start the season 3-0, Thompson didn’t play around as the Warriors came out to score 10 runs in the first two innings of the contest with Hueytown.

Those were 10 of 15 runs scored by the Warriors in the win, as they went on to win by a final score of 15-2 to close out a perfect opening day.

A big reason for the success was again the domination at the plate and on the mound as Thompson picked up 13 hits and limited Hueytown to just three hits.

Nine different Thompson players ended the game with a hit, while all nine also added at least one RBI in the win.

Haskins ended her day with a 2-for-3 performance, including three RBIs and two runs scored. She went a combined to go 7-for-9 with five RBIs for the day. Foote went 3-for-4 in the final game, including a game-high four RBIs.

By ALEC ETHEREDGE | Sports Editor The 2018 soccer season is officially under way as a total of seven different... read more