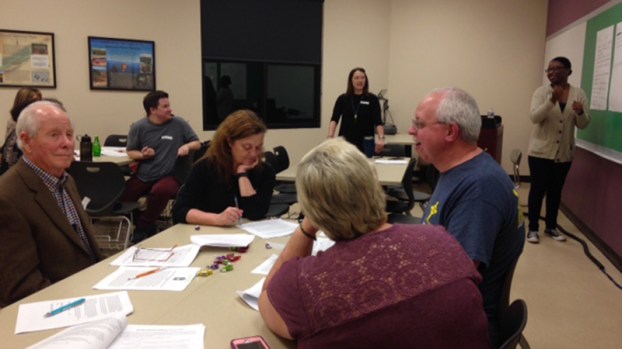 A small group discusses LGBTQ rights and works on the NDO in Montevallo during a Feb. 19 forum. (Contributed)

Those attending a forum on Feb. 19 on the proposed Montevallo Non-Discrimination Ordinance broke into groups to discuss what they liked and didn’t like about the proposed city legislation that would extend federally and state-protected civil rights to LGBTQ individuals.

The latest hearing was in University of Montevallo on Main with around 100 attendees who divided into sub-groups for discussion. The forum took up the latest version of the NDO and focused on three questions:

Many of the same people in the Feb. 19 crowd had attended another forum, two panel discussions and a couple of ad hoc committee meetings on the proposal. Virtually no one appeared to have changed his or her position.

City Councilman Rusty Nix seemed still to be trying to make the NDO disappear clause by clause. Flushed by his earlier success in eliminating the entire section devoted to the Human Rights Commission, Nix said Monday night that he would like to see the section on municipal contracts eliminated. This section would require those who bid on city business to observe the terms of the NDO.

In fact, Nix said that he would like to see the entire NDO converted to a mission statement without force of law.

When asked to articulate the items she liked about the proposed ordinance, Sherry Vallides replied: “Nothing.” Simultaneously insisting there were no problems in Montevallo to be addressed by such an ordinance, Vallides asserted that passing the NDO “will just open the door to a lot of problems.”

On the other side of the issue, Greg Reece, one of the MAP organizers, spoke in favor of restoring the HRC to the draft ordinance. The HRC would screen complaints. The current version of the NDO puts that responsibility solely on the city clerk.

The previous versions had included the words “real or perceived” regarding race, gender, age, etc.  Removing those words was another Nix victory. Reece spoke for restoring them. Nix had said the words could provide an avenue for someone to claim a violation unjustly.

The NDO idea was born some two years ago when MAP brought it to the City Council.

“Whether a law exists or not,” Mayor Hollie Cost said, “it is patently clear that the most important thing for us all to do is to continue the conversation.”

She said a further revised NDO, incorporating consensus comments from Monday night’s forum, could make it to a council agenda as early as March 12.  However, Cost said she did not anticipate a final vote that soon.

CHELSEA – The Chelsea High School competitive show choir, “Out of the Blue,” is preparing to perform in its first... read more