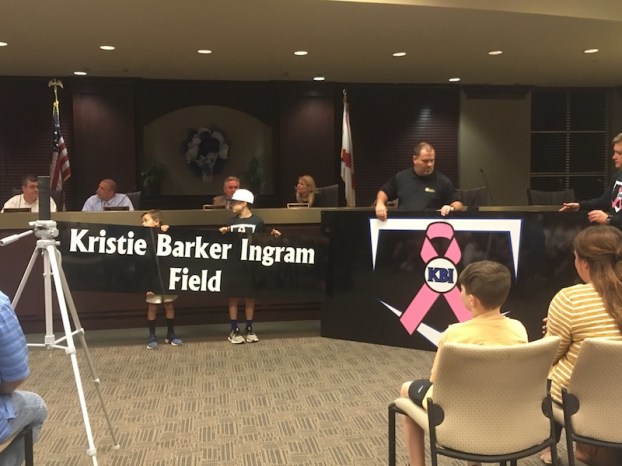 CHELSEA – The city of Chelsea discussed several public and private property-related announcements, ordinances and resolutions at a regularly scheduled council meeting on the evening of Tuesday, Feb. 20.

During the mayor’s reports at the beginning of the meeting, Mayor Tony Picklesimer dedicated the baseball field at the sports complex on Shelby County 11 as the Kristi Barker Ingram Field in honor of a local volunteer who died in November 2017.

The presentation of two large signs that displayed Kristi Ingram’s name and a pink breast cancer awareness ribbon was met with applause from a standing-room only crowd, which included numerous members of the Chelsea Youth Club and Chelsea High School baseball team.

The city council also passed an ordinance to approve a request from Evolution Holdings, LLC owner Shafig Samji to re-zone his 3.54-acre property on Griffin Corporate Drive from a B-1 to a B-2 commercial property. According to Picklesimer, Samji filed the re-zoning request to enable a used car lot to be established as an addition to the property.

Several Chelsea residents spoke out against the re-zoning ordinance at a public hearing that was held at a previous city council meeting. Picklesimer said the ordinance only covers the property’s re-zoning, and Samji will have to present all plans for the establishment of the used car lot to the Chelsea Planning Commission before the council approves it.

The majority of the city council voted in favor of the ordinance, with the exception of members Tiffany Bittner and Casey Morris.

An ordinance to annex the 5.7-acre property, which is owned by Scott and Kellie Crane and located on Dorough Road, was unanimously passed.

The city council also heard the first reading of a proposed ordinance to remove abandoned vehicles and other property from public areas.

–The city expressed its gratitude to the volunteers and first responders who helped to locate Chelsea resident Lisa Holman, who was recently reported missing after a car accident.

­–A resolution for the upgrade and expansion of the city’s public radio system was passed.