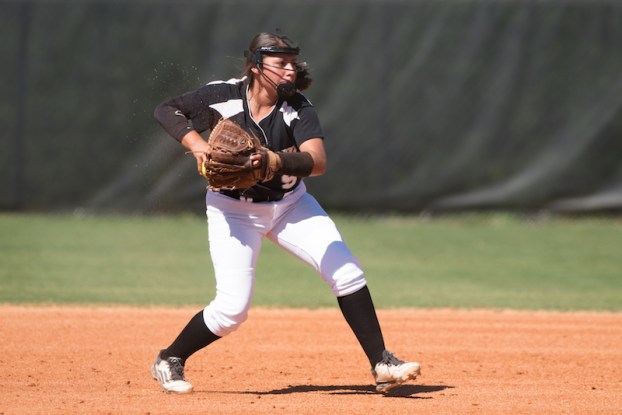 The Pelham Panthers got a walk-off win over John Carroll to kickstart their 2018 softball season. (File)

PELHAM – Trailing 12-11 in the bottom of the seventh with two runners in scoring position and the bases loaded, Brianna Copeland stepped to the plate with the Pelham Panthers down to their last out in an opening-day game on Thursday, Feb. 22, against John Carroll Catholic High School.

After watching three consecutive balls and then one strike, Copeland found herself in a hitter’s count knowing a strike had to be thrown to avoid walking in a run to tie the game.

Copeland then got the exact pitch she was looking for and drove a hard ground ball to right field, which allowed teammates Yoly Paredes and Emily Shirley to come in and score for the 13-12 walk-off win to start the 2018 season.

It was one of two hits for Copeland in the game as she finished the contest 2-for-4 with three RBIs and one run.

The win also marked the start of a new era as first-year head coach Rachael McClure picked up a victory in game one of the season.

McClure couldn’t have asked for a better offensive performance from her team as they combined for nine hits and 10 RBIs, while picking up six walks and just five strikeouts in the game.

The Panthers started the offensive attack early in the game as they scored five runs through the first two innings, which allowed them to take a 5-3 advantage after two innings of play.

Pelham’s first two runs in the bottom of the first inning came on an RBI single from Paredes and a fielding error by the Cavaliers.

After John Carroll took a 3-2 lead in the top of the second inning, the Panthers regained the lead quickly in the bottom half of the inning. Several errors by the Cavaliers allowed baserunners to move up and also allowed one run, before Shirley ripped a two-RBI single up the middle to give Pelham the 5-3 lead.

Thanks to two doubles and two walks, John Carroll busted things open in the top of the third, scoring four runs to take a 7-5 lead.

It looked like they had command of the game, but Pelham quickly responded an inning later with two runs in the bottom of the fourth to tie the game at 7-7.

The fifth inning was a quiet scoreless inning, but that didn’t last long as the two combined for 11 runs in the sixth and seventh innings.

The Cavaliers regained the lead with two runs in the top of the sixth to start the back-and-forth fun.

In the bottom half, Pelham picked up two extra base hits, which were part of a four-run inning to put the Panthers on top again with a 11-9 lead heading to the final inning.

With a two-run cushion and needing three outs, Pelham seemed to be sitting in a good spot, but no lead was safe in this matchup.

John Carroll was able to put up three more runs in the top of the seventh thanks to two singles, a hit batter, two walks, a sac-fly and two wild pitches as they reclaimed their spot on top with a 12-11 advantage.

That’s when Pelham was able to string together back-to-back walks with two outs in the bottom of the seventh, leading to Copeland’s walk-off hit.

By ALEC ETHEREDGE | Sports Editor The Evangel Lightning baseball team is off to a fast start in its first... read more