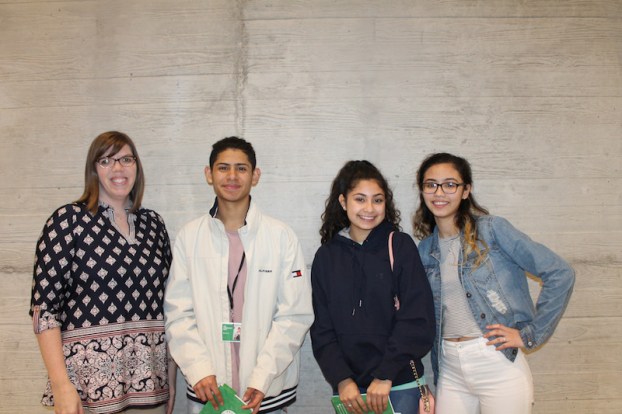 “Looks like my Panther Playback three will be the only broadcast students attending the field trip,” PHS Broadcast teacher Melissa Brown said.

“We have a few yearbook students and many Lit Mag kids going. We’ll fill our bus,” I responded. “What about Preet Patel?”

“No, he has to work,” Brown said. “Really, he’s not even in the class. He made a mash-up of everything the Panther Playback Staff did. When I saw it, I told them to go and get him. Preet works with the group whenever he can now. He is amazing with video editing.”

“So he does this for fun on his own time?”

“Evidently,” said Brown. “This group is super smart. They made a PCS video in our Panther Playback format. They’re showing it at the board meeting.”

Watching the PCS Panther Playback video at the BOE meeting, I was impressed—along with everyone else—as we enjoyed a fast-paced, informative video.

Witnessing the energy of this group at the University of Alabama was even more exciting.  Immediately upon arrival at the University of Alabama, our entire Communication and Media Arts Academy watched the keynote speaker. Afterwards, our literary magazine and yearbook staffs were off to more sessions—while PHS Playback received their assignment to stay up and running—seeking out their next video clip.

Asking Brown how this high energy group emerged in broadcast was revealing.

“One day, something lit a fire in them. Since then, they’ve been using their voices to tell stories about Pelham High. I’ve mostly guided them through a process they started on their own. Seeing the same eager spark in them that I had at that age, I’m truly honored to share their experience,”  said Brown. “And judging by the awards brought home from ASPA and the recognition they’ve received from the school board video, they are well on their way.”

At the ASPA Awards ceremony, Dora Hernandez, Diana Velazquez and Wilmer Reyes received numerous awards for their work. They made notes about the additional awards they plan to win next year. Panther Playback continues.