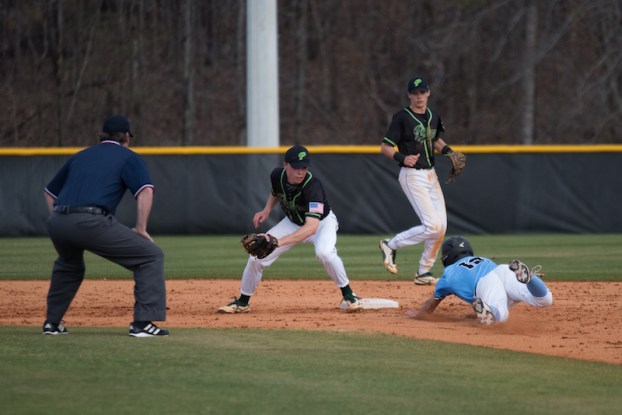 HOOVER – After an up and down 2017 baseball season, the Pelham Panthers are off to a flying start in 2018 and look like the Pelham of old through four games.

The Panthers started the season 3-0 with wins over Shelby County, Pinson Valley and Chilton County, and most recently picked up their fourth win in a row to start the season after taking down county-foe Spain Park on Thursday, Feb. 22, by a final of 8-5.

Pelham’s offense used two big spurts in the game, a three-run third inning and a four-run fifth inning, to account for the win.

After a scoreless first inning, the Panthers came to the plate in the top of the second inning and Mitchell Rottier knocked a hard-hit ball to left field that fell and allowed two runs to come in.

With two runners now in scoring position, Carter Reid stepped to the plate and drove a ball deep to right field that allowed Jackson Weaver to come in and score on a sacrifice fly that gave Pelham a 3-0 lead through two innings.

Through the first three innings of the game, Pelham starting pitcher Cody Ferguson was locked in and didn’t allow a run.

That changed in the bottom of the fourth as Spain Park was forced to start being aggressive.

Ferguson allowed a walk to start the inning, which was followed by a single from Sam Dozier to put the first two batters of the inning aboard.

An error during Matthew Moser’s at bat and a single by Jarrod Kennington allowed two Spain Park runs to cross the plate and cut the deficit to 3-2.

Two batters later, John Kennington laid down a sacrifice bunt that brought in the Jaguars’ third run of the inning to tie the game 3-3 at the end of the fourth.

Pelham answered in a big way in the top of the fifth by posting its best offensive inning of the game. The Panthers strung together two singles, two walks and another single to post two runs and open up a 5-3 lead.

After a double play looked like it was going to minimize the damage, Reid drove a line drive to right field that brought in two more runs to give the Panthers a 7-3 lead.

Spain Park was able to put together a threat in the bottom of the sixth inning thanks to a hit batter, two singles, a walk and a sac fly to start the inning.

It brought home two runs for the Jaguars to cut the Pelham lead to 7-5, but that’s as close as SPHS was able to get for the remainder of the game.

Pelham added one more insurance run in the top of the seventh, before Kyle Camlic closed the game out with a 1-2-3 inning on the mound in the bottom half.

Reid paved the way for the Panthers in the game with a 3-for-3 performance that featured three RBIs and one walk. Hunter Stowe also had a strong game going 2-for-3 with two walks and one run scored. Rottier ended the night with two RBIs as well.

Both of the Kennington’s combined to go 3-for-6 with two RBIs and one run scored.

By ALEC ETHEREDGE | Sports Editor PELHAM – Trailing 12-11 in the bottom of the seventh with two runners in scoring... read more