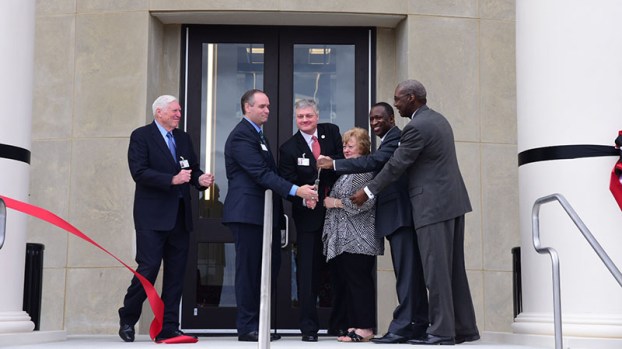 ALABASTER – Members of the Alabaster City School Board cut the ribbon at the entrance to the new Thompson High School at 12:19 p.m. on Saturday.

Superintendent Dr. Wayne Vickers offered brief remarks at the dedicatory event that began at noon. The ceremony was attended by a host of state, county and city officials.

Vickers noted that the city school board was established in 2013 and plans for expansion were made shortly thereafter.

“This new facility is a promise made and a promise kept,” he said. “It’s part of our ongoing commitment to excellence. Our children are worth every cent we spent on this project.”

“We listened to our students’ ideas about color schemes and lay-out, and they were a big help,” he said. “And we appreciate our teachers who packed and unpacked without missing any valuable teaching time.”

Vickers said the new building is built for “success and safety.”

“It’s time to start a new journey, so welcome home, Warriors!” he said. “The best days are yet come.”

After the Thompson High band played the state song and the Madrigals chorus led in the Thompson alma mater, the public was invited to tour the new facility.

“Thompson High is on the cutting-edge of technology,“ he noted. “Their engineering program is innovative. Students are designing orthotics and using 3-D printers.”

Palmer said he served on the House Space, Science and Technology Committee until recently when Speaker Paul Ryan asked him to take a new assignment.

“I tell students who love math and science that the next 25 years is for them to excel,” he said. “We will have a manned flight to Mars. Huntsville is involved, of course, and students like these at Thompson will be on the cutting edge of space exploration and technology.”

“I’m an adopted Warrior, but my son graduated from Thompson in 2013,” she said. “We have a lot of pride in this new school and believe it’s a great thing for our growing community.”

Handlon said she lives nearby and watched the progress every day while traveling Thompson Road.

“This new school has a ‘wow’ factor,” she said. “Our students have been to other schools for competitions and events and seen what others have, but now we have state-of-the-art facilities right here.”

Thompson’s new address, 1921 Thompson Road, was selected to commemorate the school’s founding in 1921.

Vickers spoke the only somber word of the day before his prepared dedicatory remarks.

“A member of our Warrior family, Camryn Elise Callaway, died this week,” he said. “This is a great loss and we’re sad today.”

Vickers led the attendees in a moment of silent prayer for the family.