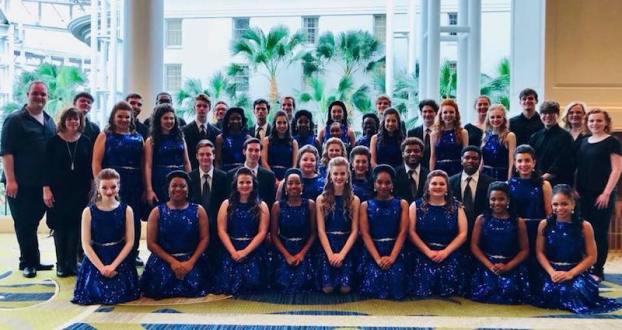 The ChHS "Out of the Blue" show choir received first runner up in its preliminary division, overall fourth runner up and Best Overall Female Soloist at the Heart of America competition. (Contributed)

ChHS’s ‘Out of the Blue’ receives multiple accolades

CHELSEA – Chelsea High School’s “Out of the Blue” competitive show choir returned from the Heart of America competition at the Gaylord Opryland Resort in Nashville with national recognition on Saturday, Feb. 24.

During the competition, “Out of the Blue” performed alongside show choirs “double their size with triple the experience,” from schools all over the country.

While in Nashville, “Out of the Blue” had the opportunity to perform two of its contest songs, “I Look to You,” by Whitney Houston and “Devil in Disguise,” by Elvis Presley, in the historic RCA Studio B while playing some of the original instruments used in Presley’s 1963 record.

“Out of the Blue” is directed by Kay Dick. Choreography and show design is done by Dallas Pritt, who is assisted by Isaiah Ruyf. Music arrangements were done by Nick Brockcamp, the show band is directed by Melodie Dean and Landon Jones and technical direction is done by Teal Dick and Billy Mitchell.

“Out of the Blue” is comprised of 32 students who sing and dance, seven band members and a five-person technical crew.

The show choir was escorted home from the competition by Shelby County Sheriff’s Office Chief Deputy Chris George, and received a warm reception upon arrival.

“They were met at the school by cheering fans, family and friends as the bus pulled up and students unloaded from a very eventful, memorable and successful weekend,” the press release read.

ALABASTER – Sixteen young women competed for the title of the 2018 Miss Thompson High School during the school’s annual... read more